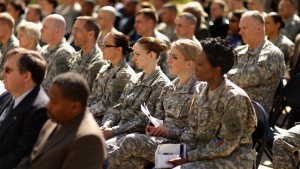 Sexual assault in the military is getting worse.

It’s Friday. When will we get some good news?

See the dog story below. But yes, this is awful. Yesterday, the Pentagon dropped a report saying that there was a nearly 38% spike in sexual assaults reported by service members in 2018 compared to 2016. To put the percentage into numbers, there were more than 20,000 instances of “unwanted sexual contact” – which can be anything from groping to rape. And only a third of the victims reportedly told a superior about the assault.

Please tell me something is being done about this.

In recent years, senior military officials have repeatedly said that this is a problem that needs to be addressed. Now, Acting Defense Secretary Patrick Shanahan is saying what’s happening is “unacceptable” and not to “the standards and expectations we have for ourselves or for each other.” He has ideas on how to tackle the problem. That includes a program to catch serial offenders, better training for junior officers and junior enlisted leaders, and making sexual harassment a standalone military crime.

What’s the likelihood any of that will actually work?

Well, if it’s up to Congress, likely. Lawmakers like Rep. Jackie Speier (D-CA), Sen. Kirsten Gillibrand (D-NY), and Sen. Martha McSally (R-AZ) want to see some real change happen. Yesterday. And are willing to have Congress step in if needed.

The #MeToo movement brought the conversation of sexual misconduct to the forefront. But while the Pentagon has recognized there’s a problem, the numbers show that there’s been a lack of progress to fix it. More needs to be done to protect those that protect us.

What the Trump admin is working on these days…

Protections for health care workers. Yesterday, the Trump admin finalized rules that would make it easier for these workers to deny care if it goes against their religious or moral beliefs. Since Trump has taken office, his admin has focused on defending religious freedoms, giving Christian conservatives (who make up a large part of his base) something to get excited about. With these new rules, the admin says people like physicians, teachers, nurses, pharmacists, and faith-based charities would be protected from having to provide or pay for services like abortion or sterilization.

What’s cutting people out of their life…

Facebook. The company is banning far-right and anti-Semitic accounts of people like Alex Jones, Milo Yiannopoulos, and Louis Farrakhan from its sites. The reason: the company says they promoted or engaged in violence and hate, which violates its policies. Facebook’s recently been in the spotlight for not doing enough to tackle hate speech and white supremacy. Many say this is a step in the right direction for the company.

Women’s hockey players. More than 200 of the players said they will not play in any professional league in North America because of unfair conditions. They say they make as little as $2,000 per season and don’t get health insurance. And that they’re standing up “not just for this generation of players, but for the generations to come.” The boycott comes about a month after the Canadian Women’s Hockey League abruptly shut down – making the US-based National Women’s Hockey League their only option to play.

Peter Mayhew. Earlier this week, the actor died at age 74 after suffering a heart attack. You know him for playing Chewbacca in the original “Star Wars” trilogy, as well as some of the more recent movies like “Revenge of the Sith” and “The Force Awakens.” Celebrities have been posting tributes on social media, with actor Mark Hamill calling him “the gentlest of giants.” RIP.

There’s one less person in Baltimore’s mayoral office. Yesterday, Mayor Catherine Pugh resigned amid a scandal around the sales of her children’s books.

When you need something to cheer you up…

Look no further than this dog.

When you hear this week was Holocaust Remembrance Day…

Skimm This. We spoke with survivor Edward Gastfriend to document his story and hear the message he has for young people.