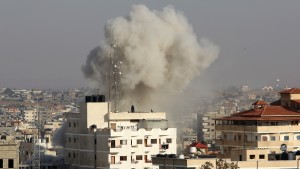 Violence between Israel and Gaza is flaring up.

The Gaza Strip used to be controlled by Egypt, but Israel took it over in 1967 during the Six-Day War. Decades later, Israel withdrew its settlements and took its troops out of the territory. And Hamas (the Islamist militant group that the US, EU, and Israel consider a terror group) took control. Since then, Israel and Egypt have imposed a blockade on Gaza – something Israel says is necessary to stop weapons coming in. And a number of wars have broken out between Hamas and Israel.

Yikes. So what's the recent violence?

Not good. But why now?

A lot of it may be tied to the blockade. Since Israel and Egypt imposed the blockade 12 years ago, the territory has fallen into an economic crisis that includes sky-high unemployment rates, especially for Gaza's youth. The two sides have recently been trying to work out a deal where Israel would ease up restrictions on Gaza. But some are accusing Israel of not holding up its end of the informal agreement.

Complicated. As always. This is also happening as both sides are prepping for some major events. Muslims in Gaza kick off the holy month of Ramadan today. And Israel marks its memorial and independence days this week. It's also set to host Eurovision (a major song contest) next week, which militants have threatened to disrupt. Some think the rocket attacks could be designed to rattle these events and discourage tourists from coming.

The death of dozens of people over the weekend is the deadliest fighting since the 2014 war between Israel and Hamas. It looks like things have simmered down. At least for now.

Where negotiations aren't going as planned...

China. Yesterday, President Trump threatened to raise tariffs on $200 billion of Chinese goods at the end of the week. For months, the two sides have been working to renegotiate trade rules both sides can shake on. But Trump's apparently not happy with how slow these talks have been going. The sticking points: how China forces US companies to share their tech and trade secrets, and when to lift tariffs. The two sides were supposed to resume talks this week. This latest move could get the US more concessions from China...or throw progress into question.

North Korea. Over the weekend, the country fired an apparent short-range missile into the sea for the first time since 2017. Many see this as the country's way to test the US and push for more concessions (think: sanctions relief) as the two negotiate North Korea's nuclear program.

$: What's money got to do with it? Here's how tariffs can affect your wallet.

Brunei. The small southeast Asian country recently updated its criminal code to punish gay sex and adultery with death by stoning. It's the sultan's latest effort to impose a harsh form of Islamic law there. But after international outcry – and calls to boycott hotels owned by the sultan – he's apparently hitting pause on implementing the new rules.

The crash landing in Russia. Yesterday, a passenger plane made an emergency crash landing at an airport in Moscow shortly after takeoff. At one point, the plane caught fire. At least 41 people were killed – more than half of the people who were on the flight. Authorities are investigating what happened.

What made people spill their mint juleps…

The Kentucky Derby. Maximum Security (yes, that's a horse's name) crossed the finish line first. But in a big twist, officials called foul – saying that the horse had made a move on the track that impeded other horses. They handed the win to the race's runner-up, Country House. It was the first time in the race's history that a winner was disqualified because of a foul. Everyone, yes everyone, had opinions.

Who gets all of the love…

When your wallet's feeling a little empty...

Skimm This. Our daily podcast told you why the new jobs report will have your wallet feeling full. And it tells you all the news you need to know, every day at 5pm ET.