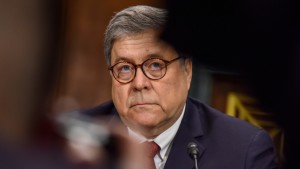 C IS FOR CRISIS

Things in DC were so tense yesterday, that the term "constitutional crisis" is getting thrown around.

It's not great. And it all comes down to that little thing called the Mueller report. Quick refresh: special counsel Robert Mueller spent two years digging around and didn't find that the Trump campaign conspired with Russia to win the 2016 election. But he was 'meh' on whether President Trump tried to obstruct justice. He passed his findings over to the DOJ and Attorney General William Barr – who later released a redacted version of the report to protect things like classified info. But House Democrats are saying 'cough up the full report.'

Alright, say something new quick before you lose me.

Get some coffee. Now, here's what went down yesterday:

One...President Trump asserted executive privilege over the full report. Aka when presidents get to put a fig leaf over anything they don't feel like sharing because of things like confidentiality. The Trump admin says Dems are overstepping by using their House majority to attack the admin. Dems are saying 'funny, we think it's who's overstepping.

Two...the House Judiciary Committee (controlled by Dems) voted yesterday to hold Barr in contempt of Congress for refusing to share the full report with them. Yes, this is a thing. And it's what led committee chairman Rep. Jerrold Nadler (D-NY) to claim that the gov is currently facing a "constitutional crisis." Now, the full House gets to vote on this. If they're on board too, then Barr – the country's highest law enforcement official – could be sent to jail. Though that's pretty unlikely.

Three...the Senate Intelligence Committee (controlled by Republicans) subpoenaed the president's son, Don Jr. It's not clear what he'll be asked about, but it seems to be the first time that Congress has subpoenaed someone from the president's immediate family. And shows that some Republicans still have questions.

The country is watching an escalating power struggle between the executive branch and the legislative branch. And it's unclear which one – if either – will come out the winner in all this.

AND ALSO...THIS What's more stressful than having back-to-back meetings all day...

US-China trade talks. Today, both countries are expected to continue their months-long negotiations to end their trade war. Since last year, they've been going tit-for-tat on tariffs. The Trump admin's goal was to encourage more Americans to buy 'made in the USA' products, and pressure China to change some of its allegedly shady practices – like forcing US companies doing biz there to share tech and trade secrets. Over the weekend, China apparently made edits to key parts of the deal. So earlier this week, President Trump turned up the heat and threatened to raise tariffs on $200 billion worth of Chinese goods starting tomorrow. Meaning the two sides have less than 24 hours to talk things out.

...Oh and speaking of things getting tense, North Korea. It apparently just launched its second projectile in less than a week.

Skimm More: A lot of candidates are applying for Trump's job. We spoke to candidate Pete Buttigieg about how he'd handle US-China trade.

What your health-nut friend is talking about…

Walmart. The company is raising the age to buy tobacco products and e-cigarettes to 21. The world's largest retailer also said it's getting rid of flavored nicotine products as the country deals with what the FDA's called a vaping youth epidemic. This comes after Walgreens and Rite Aid announced similar plans. The new policies are expected to take effect in July.

Drug prices. Yesterday, the Trump admin announced that pharma companies will have to disclose drug prices in TV commercials. Drug prices have been on the rise – and there's been bipartisan support to bring them down. The new rule is set to take effect as soon as this summer. The announcement is seen as one of the biggest steps the admin has taken to deliver on a key campaign promise to help lower drug prices.

$: What's money got to do with it? Here's what the new rule for drug companies could mean for your wallet.

What's getting phased out faster than a bad fashion trend…

Coal. The UK just went one week without burning any coal for the first time since 1882. Yep, that's 137 years. Reminder: coal plays a big role in climate change because it releases a lot of carbon dioxide (a greenhouse gas) when it's burned. Coal power is still a part of the UK's energy system, but the country is working to phase it out by 2025.

Skimm More: We Skimm'd how climate change works and what else contributes to it.

Why zero waste is flying high…

Skimm This Aka our daily podcast tells you which airline is spearheading the zero-waste movement. And all the news you need to know, every day at 5pm ET.