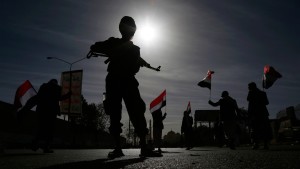 Good news came out of Yemen over the weekend.

Haven't heard that in far too long.

Right. But it's unclear how long the sigh of relief will last. The country's been in a civil war for the past four years – seen as a proxy war between the Saudi-backed, internationally recognized government and Iranian-backed Houthi rebels. Tens of thousands of people have died. Millions face starvation. Both sides have been accused of war crimes. The UN blames the Saudi coalition for the majority of civilian deaths. It calls this the world's worst humanitarian crisis.

Maybe. This has to do with a port.

Yes, called Hodeidah. It's the entry point for around 70% of the country's humanitarian aid. But it's also the main supply line for Houthis. The Saudi coalition has reportedly accused the Houthis of using it to smuggle Iranian weapons, including missiles that targeted Saudi cities. Last year, the Saudi coalition tried to gain control of the port. Twice. In December, the two sides agreed on a ceasefire. But the process has been stalled for months. Now, that could be changing.

Over the weekend, the Houthis started withdrawing from this port and two others – the first in a series of steps to create a safe perimeter as part of the ceasefire. The UN confirmed it. The Houthis say they're tired of waiting for the coalition to implement its part of the ceasefire. But the timing has some raising questions. One Yemeni minister reportedly accused the Houthis of faking this withdrawal ahead of a UN Security Council meeting on Yemen.

The UN says the first phase of the ceasefire could be done this week. And it would reportedly take a leading role in managing the three ports and work to prevent the smuggling of weapons.

This is the first major step in implementing a long-delayed ceasefire in a country that is in desperate need of help. Now, everyone's holding their breath to see if this marks a turning point in the conflict...or if progress is still out of reach.

Who's in trouble with the law…

Julian Assange. Today, Swedish prosecutors reopened its investigation into a rape allegation against the WikiLeaks founder. The allegation dates back to 2010 – and is the reason he skipped UK bail in 2012 and moved into the Ecuadorian embassy to avoid extradition. Last month, after years of Assange apparently failing as a roommate, Ecuador kicked him out. Now, he's in British jail for the whole skipping bail thing. And could be extradited to one of two countries: Sweden, to face this investigation. Or the US, to face a charge of conspiring in one of its largest ever classified info leaks. UK courts could have a big decision to make.

Iran. Yesterday, a senior commander reportedly said he sees the US military presence in the Persian Gulf as a target, not a threat. Last week, the US deployed an aircraft carrier and bombers in response to what it said were Iranian threats against US forces in the region. The escalating tension comes as Iran said it will stop complying with parts of its 2015 nuclear deal, a year after the US pulled out. And as the UAE and Saudi Arabia say their ships have been the target of sabotage attacks.

China. On Friday, the US and China weren't able to reach a deal to end their tit-for-tat trade war. That was the same day the US raised tariffs on $200 billion worth of Chinese imports. China said it would retaliate. But the two are expected to continue negotiations next month. Yesterday, White House chief economic adviser Larry Kudlow contradicted President Trump and acknowledged that Americans will have to bear the brunt of these new tariffs, saying "both sides will pay."

Skimm More: We Skimm'd the US-China trade war and how it impacts you.

Where people are on edge...

Burkina Faso. Yesterday, gunmen killed six people at a Catholic church during mass. This year, the country has faced a rise in attacks from groups linked to ISIS and al-Qaeda. And over 100,000 people in Burkina Faso have apparently been displaced by the unrest so far. This latest attack was the second one on Christians in two weeks.

Peggy Lipton. Over the weekend, her family announced that the actress had died at the age of 72. Lipton was best known for her roles in "The Mod Squad" and "Twin Peaks." She had been diagnosed with colon cancer in 2004. Her daughters Kidada and Rashida Jones said she "will always be our beacon of light."

When you're planning a birthday party...

Why Mother's Day should be every day…

Skimm This. ICYMI, our podcast asked you about the moms in your life. And we listened. Now it's your turn.