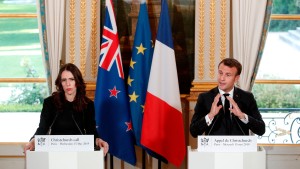 World leaders and tech companies are taking steps to keep social media from being used to spread hate.

In March, a shooter targeted two mosques and killed 51 people in the New Zealand city of Christchurch. The attack was broadcast live on Facebook and later uploaded to YouTube and other sites – which struggled to take the videos down. This led to backlash against some tech companies. Meet: the “Christchurch Call” initiative.

The initiative is a call to action organized by New Zealand PM Jacinda Ardern and French President Emmanuel Macron. Those who sign onto the nine-point plan commit to taking steps to stop the spread of online extremism while also protecting “principles of a free, open and secure internet, without compromising human rights and fundamental freedoms.” It has the support of several tech companies including Facebook, Google, Amazon, Microsoft, and Twitter. And 18 governments around the world.

Does that include the US?

It does not. The White House said it isn’t officially backing the plan because of concerns it could violate free speech. But it supports the idea and says it would “continue to be proactive” to counter terrorist content online.

What does this all mean for tech companies?

This isn’t legally binding. But they promised to do things like clarify their policies and responses to terrorist and extremist content, review algorithms that could promote extremist content, and work together to share flagged content to stop it from being uploaded across sites.

No. Earlier this week, Facebook introduced new rules for live-streaming. It said that people who break Facebook’s “most serious policies” will be immediately banned from using Facebook Live for a period of time. Unclear what falls under “most serious policies” – but current community standards prohibit spreading terrorist propaganda. A spokesperson reportedly said that with the new policy, the alleged Christchurch shooter would not have been able to livestream the attack.

Tech companies can differ on how they define or treat extremist content – but the implications can be deadly (see: violence in Myanmar). After the Christchurch attack, many seem willing to work together to address the complicated issue of policing dangerous content online. TBD if we see concrete results…or what that looks like.

Where a countdown is beginning…

Alabama. Yesterday, Gov. Kay Ivey (R) signed the strictest abortion bill in the country into law. It bans all abortions unless a woman’s health is in serious danger. There are no exceptions for victims of rape or incest. And doctors who carry out abortions could face up to 99 years in prison. The ban is set to go into effect in six months. But it’s expected to get held up in courts as orgs like Planned Parenthood get ready to sue.

What beef is getting hotter than your BBQ grill…

US-Iran. Last week, the US deployed an aircraft carrier and bombers to the region because of alleged threats made by Iran against US troops. Since then, Saudi Arabia – Iran’s chief rival – says it’s experienced attacks on its oil infrastructure (think: tankers, a key pipeline). And a report came out that the Trump admin was discussing plans to send up to 120,000 troops to the region if needed, which President Trump denied. The latest: yesterday, the US ordered non-emergency employees out of its embassy and a consulate in neighboring Iraq.

Who’s got health on the mind…

The CDC. A new report found that US birth rates have reached a record low. And that last year, the total number of babies born was the lowest in more than 30 years – below what’s needed to maintain a steady population. The only age group that upped their baby-making pace was women in their late 30s and early 40s.

North Carolina. Yesterday, the state became the first to sue Juul. It’s accusing the vape company of encouraging minors to use its products and become addicted to nicotine. Think: getting influencers to promote its products and being careless about age requirements when buying online.

$: What’s money got to do with it? Here’s what low birth rates could mean for your wallet.

When you hear Hershey’s is updating its look…

It’s not the only one grappling with technology.

…Oh and speaking of technology, President Trump is trying to keep Chinese tech giant Huawei far, far away from here.

When you feel guilty about that splurge…

At least you didn’t drop more than $91 million on a steel rabbit.

When you’re feeling distracted at work…

Skimm This. Our daily podcast tells you how your co-workers are keeping you from doing your job. Tune in so you can tune them out.