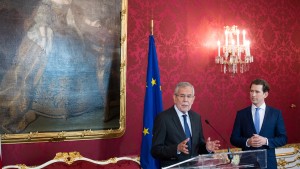 After a scandalous weekend, the country is getting ready for snap elections.

A video came out on Friday showing the country's vice chancellor, Heinz-Christian Strache, appearing to promise a woman – claiming to be the niece of a Russian oligarch – gov contracts in exchange for campaign support. Somehow this is not a movie plot...yet. The events allegedly took place in Ibiza in 2017 – three months before the last elections. Further proof that what happens in Ibiza does not stay in Ibiza.

Yup. So over the weekend, Strache quit, but denied doing anything illegal. The country's chancellor said he'd end his center-right party's controversial coalition with Strache's far-right party. Then yesterday, Austria's president called for early elections in September – saying they're necessary to rebuild trust in the gov.

Strache's far-right party is one of the most successful anti-immigrant and nationalist groups to gain power across Europe in recent years. His downfall comes just as far-right leaders are hoping to expand their representation in this week's European Parliament elections. TBD which way the votes will sway in September.

Over the weekend, the country's conservative government pulled off a surprise victory.

What went down under?

Polls consistently showed a win by the center-left opposition – which campaigned on tackling climate change after the country experienced a series of crises (think: wildfires, drought, floods, and extreme temps). Over the weekend, PM Scott Morrison's conservative coalition managed to hold on to power. And his surprise win has some people making comparisons to US President Trump's poll-defying 2016 win.

Many saw this as Australia's defining election for climate change. That didn't happen. Instead, voters – and the so-called "quiet Australians" – went with a candidate who focused on the economy, jobs, immigration cuts, and support for home buyers.

It looks like the world's biggest democracy handed PM Narendra Modi another win.

Modi has been prime minister since 2014. Since then, his administration has rolled out economic reforms and healthcare initiatives. But he's struggled to create jobs. Last year, the unemployment rate hit a 45-year high. Modi focused his campaign on national security and appealed to Hindu nationalism. After voting ended yesterday, exit polls showed that Modi appears poised to win re-election with an even bigger majority in parliament.

The exit polls seem to indicate that Modi's campaign strategy paid off. But polls have been off before. And we won't know for sure the extent of Modi's success until official results come later this week.

Which university is facing its past...

Ohio State. On Friday, it released a report on deceased Dr Richard Strauss. Last year, a man came forward to say he'd been abused by Strauss, who was the university's athletic doctor from the late '70s through the '90s. But he wasn't necessarily the first to do so. Despite a series of complaints, the university didn't begin to investigate until 1996, suspending Strauss later that year. Following this new accusation, the university commissioned an investigation that involved interviews with more than 500 people. It found that Strauss had sexually abused at least 177 male students from at least 15 athletic teams. And that OSU staff knew about the abuse as early as 1979.

Who's sending out save the dates…

The US. Yesterday, the White House said it will unveil the first part of the Trump admin's Israeli-Palestinian peace plan at a meeting in Bahrain next month. The plan has been in the works for years, led by senior adviser and Trump's son-in-law Jared Kushner. What we know: the admin's calling the event an "economic workshop." And hopes to encourage regional investment in the West Bank and Gaza. What we don't: a lot. Business leaders and finance ministers are getting invites. Foreign ministers are not. The workshop will avoid political issues that have before made peace a long shot: borders, the status of Jerusalem, what should happen with Palestinian refugees, and more. It's unclear if Israeli and Palestinian officials will attend.

Who's feeling the heat...

Huawei. Google has suspended business with the Chinese tech giant. Until now, Huawei smartphones have had access to Google's operating system and things like Google Play Store and Gmail. Although the details are still unclear, it looks like Huawei phones could lose some or all of that. The news came days after the Trump admin announced trade restrictions with Huawei designed to make it harder for the tech giant to do business with US companies.

Skimm More: Reminder, a lot of the US-Huawei beef is over 5G. Read up on why the tech is almost as talked about as "Game of Thrones." Speaking of...

What everyone has opinions about...

"Game of Thrones." After eight years, the series is signing off. But fans will continue complaining, from this day until their last day. And beware: spoilers are coming.

Who had a weekend update...

Who you wish spoke at your graduation…

Robert F Smith. Yesterday, the billionaire told Morehouse College's graduating class he would pay off their student debt...costing him an estimated $40 million. He encouraged the students to pay it forward so future classes can have "all the opportunities of the American dream." Brb, crying.

When you're still paying off your student loans…

Skimm This. Our daily podcast tells you how some companies are helping their employees pay off their student debt...with their vacation days. If you like piña coladas, and having no student debt.