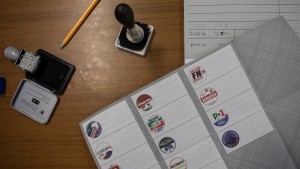 AND THE VOTES ARE IN…

After four days of voting, we're finding out the results of the European Parliament elections.

I put my phone down for a few days. Can I get a recap?

Over the last few days, millions of EU citizens voted for their reps in the European Parliament. The group is responsible for passing legislation for the bloc. This year's elections had the highest voter turnout in 20 years.

Exercising democracy, love it. So who won?

The Greens…because, climate change. We keep learning about the dangers of climate change and how the world is close to a point of no return. The Greens group is now the fourth-largest voting bloc, and is sending thank-you notes to voters in Germany, France, and the UK.

The far right…known for their anti-EU, anti-migrant platform did well in Italy, France, and Hungary – places that already had a sizable far-right presence. It didn't win as many seats as many anticipated. But it did well enough to cement the fact that the far right isn't going anywhere – something Italy's deputy PM says is a "sign of a Europe that is changing."

Well, let's ask those who weren't pulling out the celebratory bubbly…

The coalition…made up of center-left and center-right parties lost its majority for the first time, ever. Now it'll have to team up with less mainstream parties to make sh*t happen in Parliament – on everything from immigration to trade.

UK PM Theresa May…can't catch a break. Voters don't like how Brexit is-slash-isn't going. And they showed no mercy at the polls: May's Conservative Party and the opposition Labour Party had bad showings. Nigel Farage's new, pro-Brexit party came out on top – though anti-Brexit parties had more votes, combined. TLDR: Brexit goes into effect in October. Voters are still torn. And the UK may or may not leave Brexit without a deal.

Tell that to Austrian Chancellor Sebastian Kurz. Yesterday, he was ousted in a no-confidence vote over his handling of a political scandal that allegedly involves Ibiza, corruption, and a Russian oligarch's niece. The drama doesn't end there. The country's far-right vice chancellor had to resign over said scandal...but he won a seat in the European Parliament. Come on in, the water's just (far) right.

The EU was created to build economic and political stability after World War II. But the 2015 migrant crisis, climate change, and other issues have polarized voters and led to more fragmented parties. It's unclear what this latest election means for the EU's future, for next five years and beyond.

Skimm More: Read up on how the elections work and why they matter.

Where LGBTQ+ rights are being jeopardized...

The US. On Friday, the Trump administration proposed scrapping an Obama-era policy that barred health care providers and insurers from discriminating against transgender patients. The Trump admin says it rewrote the rule in response to a 2016 court ruling that found it violates health care workers' religious freedoms.

Kenya. On Friday, the country's high court upheld laws criminalizing gay sex (something that can land you in prison for 14 years there). Activists had argued the colonial-era laws violated the country's constitution. And were hoping that if Kenya ended these laws, it would inspire dozens of other countries in the region to follow suit. But the judges disagreed, saying the activists failed to prove their case. The activists said they'll appeal.

When those stories are bumming you out...

Skimm This. Our daily podcast has all the info on the first Asian country to legalize same-sex marriage. Plus, the number of couples that said 'I do' on the first day.

Mount Everest. At least 11 people have died in what's become one of the deadliest climbing seasons there. Some are blaming Nepal's government. It has no strict rules about who can climb – and handed out a record number of permits this year. That can bring much-needed cash into one of the poorest countries in Asia. But some say it's caused overcrowding, and brought in inexperienced climbers. That can get especially dangerous at the so-called "death zone" near the top of the mountain. Climbers have witnessed lines of more than 100 people waiting to reach the summit while their oxygen runs low.

Who's taking their relationship to the next level…

Fiat Chrysler and Renault. The two automakers are considering a merger that would create the world's third largest automaker. We won't leave you hanging: Volkswagen and Toyota are numbers one and two. The merger apparently still needs the thumbs up by the boards of both companies. Stockholders, rev your engines.

Whose name you need to know ASAP...

Amanda Eller. On Friday, she was found alive in a forest in Hawaii after she'd been missing for more than two weeks. During the ordeal, she told herself not to give up. She suffered a leg fracture, abrasions on her ankles, and a severe sunburn. But she was alert and in good physical condition when she was found.

When someone asks you to spill the tea about your last job...

Where do I start?

When you can't walk by the TV without thinking of Fortnite...

Put down the controller.