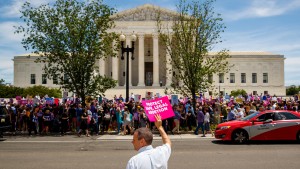 THINGS HAPPENING IN THE COURTS

The Supreme Court took on an abortion law…sort of.

Which one are you talking about?

Indiana’s. In 2016, then-Gov. Mike Pence (R) signed a law prohibiting abortions on the basis of the race, sex, or disability of the fetus. It also required the burial or cremation of fetal remains after an abortion. It was blocked from going into effect. And eventually made its way up to the Supremes.

They let the part of the law about what to do with the fetus after an abortion go into effect. But left the other parts of the law blocked. Conservative Justice Clarence Thomas said the court needs to take up the abortion part at some point. And said abortions on the basis of things like race could become “modern-day eugenics.” Liberal Justices Ruth Bader Ginsburg and Sonia Sotomayor said ‘agree to disagree’, and said they would’ve blocked the whole law from going into effect.

Got it. Where do things stand with all those other states taking up abortion?

There are a couple of updates:

Georgia…the state’s fetal heartbeat bill is set to go into effect next year. If it does, there’s a chance it may hurt the state’s economy as it’s one of the country’s top TV and film locations. Multiple celebs have already said ‘not stepping foot there.’ Now, Netflix is the first major Hollywood studio to say it could “rethink” its work there too.

Missouri…the state’s only abortion clinic may be forced to close this week. Planned Parenthood says the state’s health department is refusing to renew its annual license to provide abortions. If it’s not renewed by Friday, it will become the first state since the 1973 Roe v Wade decision to not have an abortion clinic.

Multiple states have been rushing to restrict abortion in the hopes of them getting in front of this conservative-leaning court. This Indiana case was seen as a potential preview into how the Supremes might take on the issue. But the court is showing it’s not ready to take a bold stance. Yet.

Correct. It owned two companies that produced materials for prescription opioids. The AG reportedly says that there were 18 million opioid prescriptions in Oklahoma for a population of just 3.9 million. And has pinned the blame on pharma companies.

Yes. All three were set to be part of this trial. But Teva Pharmaceuticals and Purdue Pharma both settled with the state, paying out tens of millions of dollars or more. But Johnson & Johnson is pushing back, arguing it created FDA-approved products and can’t be held liable for the whole opioid crisis. Meanwhile, the AG doubled down and called the company the “kingpin” in this public health emergency.

Almost every state is suing big pharma over its alleged role in the opioid crisis. This trial could set a precedent for whether this industry can be held accountable for an epidemic that has taken hundreds of thousands of lives around the country.

What’s getting blocked more than spam…

Disaster relief. Last week, Congress and President Trump seemed to agree on a long-delayed bill to help people affected by wildfires and hurricanes. The Senate passed it. The House has tried twice to pass it while on recess. Each time, a single Republican blocked the bill, saying reps should be there to debate adding $19.1 billion to the national debt. Or that the bill should include funding for enforcement at the US-Mexico border. This is probably just a delay – Democrats seem to have the votes to pass it in person next week.

Which country is printing out return labels…

Malaysia. Yesterday, the Southeast Asian country said it would start sending back about 3,000 tons of plastic waste to the US, UK, and other rich countries. China used to be the one saying ‘give me your two-ply, your milk cartons yearning to be recycled.’ That’s because it allowed countries to get rid of their plastics for cheap, while China could use them to make other goods. But last year it stopped due to environmental concerns. Cue rich countries trying to pass off their stuff to other countries in the region. Now, Malaysia is taking a cue from China and the Philippines. It says it’s done taking in people’s trash, and dealing with countries that can’t figure out what is and isn’t recyclable.

Skimm More: Don’t be that person. Sort out your sh*t.

Pizza Hut. Like your co-worker who spent too long outside, its Original Pan Pizza is getting ‘crispier’ – the first change to the dish since it came out almost 40 years ago. It’s also switching up its cheese blend, because pie not.

The iPod. Apple wants you to know this product still exists. And is updating the iPod touch for the first time in four years by using tech from the old iPhone 7.

…Oh and Gillette is saying ‘here’s something that’s not outdated.’ Its new ad features a dad teaching his transgender son how to shave, and is getting a lot of love online.

Skimm This. Our daily podcast goes into the World Health Organization’s decision to recognize burnout as legitimate medical diagnosis. *Downloads podcast, slacks it to manager*