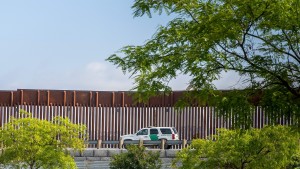 TICK TOCK, IT'S TIME FOR TARIFFS

It's Friday, give me the background.

There's been a spike of migrants entering the US. Last month, more than 144,000 migrants were detained after crossing the US-Mexico border illegally or after presenting themselves at ports of entry – the highest number in 13 years. And Trump has an idea to curb the problem: tariffs.

Last week, Trump said the US is slapping a 5% tariff on all Mexican imports until "the illegal immigration problem is remedied." And a 5% increase would happen every month until the number hits 25% – which could happen as soon as October.

What's Mexico have to say about this?

Mexican President Andrés Manuel López Obrador was apparently hoping to reach a deal...yesterday. But that didn't happen, and officials from both countries continued discussions. Mexican officials have promised to deploy up to 6,000 troops to the country's border with Guatemala – in the hopes of reducing the amount of migrants headed to the US. Unclear if Trump will accept this. But it doesn't seem like Trump's own party agrees with his approach.

Republican lawmakers warned the president that they strongly oppose the tariffs and are siding with Dems on this one. But Trump has said lawmakers would be "foolish" to try to stop him. So, the tariffs are expected to happen unless a deal between the two countries is struck ASAP.

Yes, since the White House has until today to issue a formal notice to make sure the tariffs go into effect Monday. The tariffs on Mexico could cost the US 400,000 jobs – especially in Texas. We'll say that again: tariffs on Mexico would result in lost American jobs. They would also raise the prices Americans pay for things like avocados, tequila, and more. Some experts also say that while Mexico can step up enforcement, stopping all illegal immigration into the US might be unrealistic.

Last year, Mexico was the US's third largest trading partner. But right now, it's number one. These tariffs are likely to hurt both countries' economies. It may result in higher prices for US consumers, and Mexico will probably retaliate with tariffs of its own. TBD if this means the US is headed towards an entirely new trade war.

$: Tariffs are usually paid for by the companies that import products but can be pushed onto customers. Here's how new tariffs could affect your wallet.

What won't let robocalls be…

The FCC. Yesterday, it voted to let phone companies block robocalls for customers. Pause for collective sigh of relief. We all know these types of calls have gotten out of control. In the span of a year, the FCC got millions of complaints about them. Yes, we said millions. Now they're taking action by letting your phone carrier block these calls by default.

Who's sending out an apology…

The New York Police Department. It's apologizing for the 1969 raid at the Stonewall Inn – a popular gay bar in NYC. Back in the '60s, law enforcement often considered being gay a crime. And in the early hours of June 28th 1969, police raided the bar. Customers fought back, which turned into days of riots. It was seen as a pivotal point in the modern gay rights movement, and a year later the first gay pride parade was held. In the past, the NYPD has avoided apologizing about the raid. But yesterday, 50 years later, the NYPD commissioner apologized, and said that "the actions and the laws were discriminatory and oppressive." While some were happy to hear the apology, others said 'it's just too little, too late.'

Skimm More: To celebrate Pride Month, we've Skimm'd everything from LGBTQ+ history and celebrations around the world to terms to know and books to read.

Which company is facing the heat…

Vox Media. Yesterday, hundreds of employees walked off the job. Staffers have been trying to unionize for more than a year. And they haven't been able to agree with management on how to make it happen, especially with things like salary and severance details. The company's CEO says he's still committed to making this work.

Joe Biden. The former VP and 2020 candidate said he no longer supports the Hyde Amendment...a day after his campaign said he still supports it. Reminder: that's the law that bans the federal gov from funding most abortions. Foresight is 2020.

When you wish you had a summer Friday today…

Skimm This. Our daily podcast talks about the dream that could become a permanent reality in the UK: a four-day work week. Some politicians are pretty interested, and surprise, so are three out of four British workers.

What's a hotter collab than  Flamin' Hot Cheetos and Forever 21…

The Obamas and Spotify.

Why your dog seems a little high strung…

Take a look in the mirror.