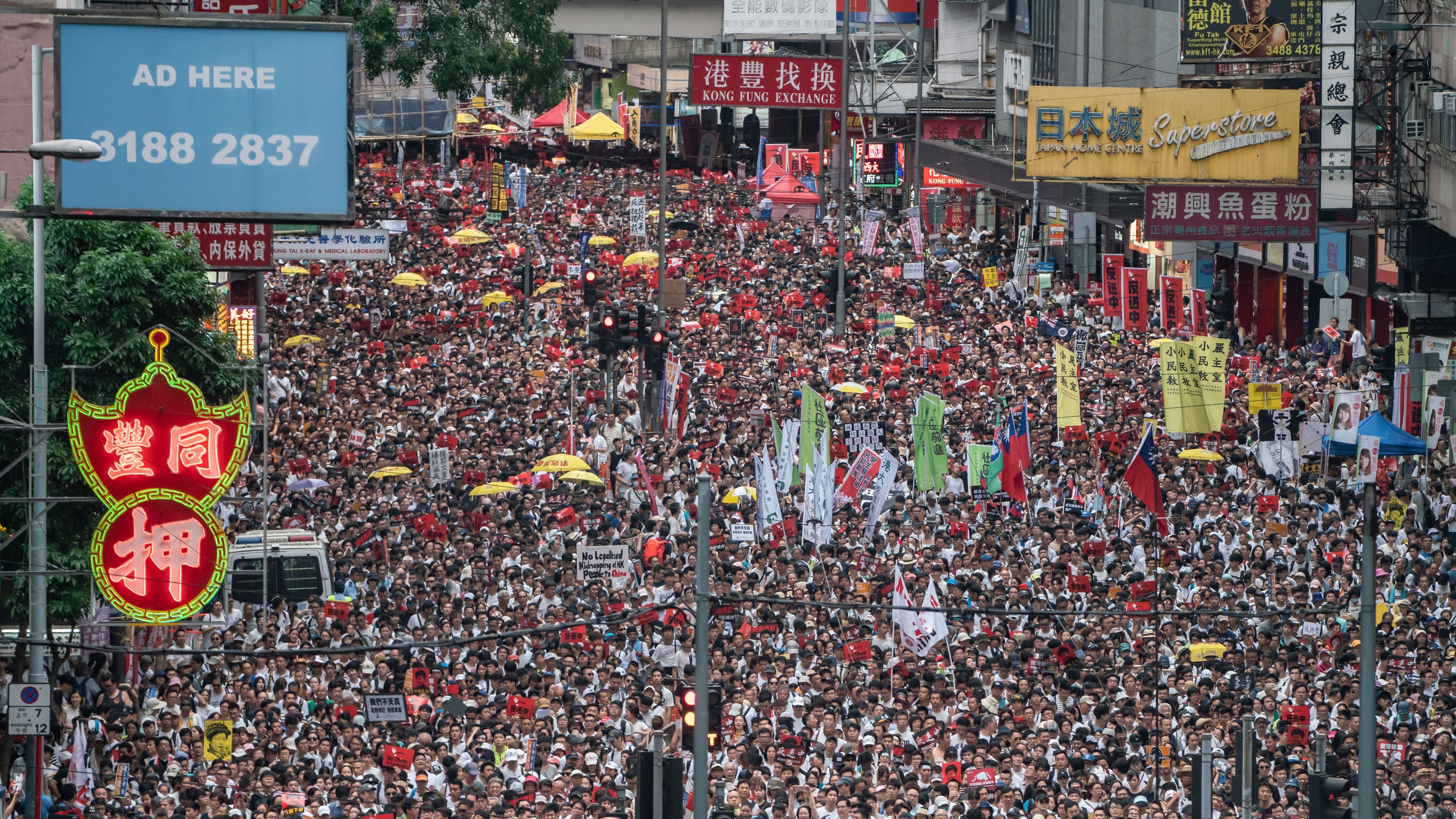 More specifics would be great.

Organizers say more than 1 million people turned out to protest a bill that would let suspects of certain crimes be extradited to mainland China.

Because Hong Kong is a semi-autonomous Chinese territory. Even though Hong Kong has its own legal and political systems, many have been wary of China’s influence over the region through the years – especially since President Xi Jinping has taken office.

He’s taken a harder stance against dissent in Hong Kong – which has typically been a safe haven from China’s communist rule.

Hm. So what are protesters saying about the bill?

They’re worried it would give China more control over the region. And because the Chinese legal system is seen as secretive, some think that suspects could be tortured or face other human rights abuses. Businesses are also concerned that the bill could harm Hong Kong’s reputation as an international financial center, since its legal system would be more closely tied to China’s.

What’s the world saying about it?

Countries like the US, the UK, and Canada have said they’re concerned about the proposal. And US lawmakers said this could “negatively impact” its relationship with Hong Kong. Meanwhile, Hong Kong says that only serious crimes would fall under this law, and it wouldn’t apply to political crimes. That it would monitor cases of potential abuse for those that are extradited. And that it wouldn’t let the city’s reputation take a hit.

So how likely is it that this will actually take effect?

It seems that the government has enough votes to pass it – and it could vote on it sometime this month.

30 years after the Tiananmen Square massacre, the Chinese gov is still cracking down on those who aren’t afraid to speak out against it. And this weekend’s demonstration – which was one of the largest in Hong Kong’s history – serves as a stark reminder of how much influence the country yields beyond the mainland.

Skimm More: Our app has an audio ep on the 30th anniversary of Tiananmen Square and how China works to keep political dissent under control today.

David Ortiz. Yesterday, the former Boston Red Sox star was shot. Ortiz – who helped the team win three World Series titles – was at a bar in the Dominican Republic (where he’s from) when a gunman shot him from behind. Ortiz had surgery and is in stable condition. Two other people were also reportedly injured. Police say the suspect was captured and that they’re still trying to figure out a motive.

Mexico. On Friday, President Trump announced that tariffs against Mexican goods were “indefinitely suspended.” Late last month, Trump said the US would slap a 5% tariff on all Mexican imports until “the illegal immigration problem is remedied.” And said an extra 5% increase would happen every month until the number hits 25%. On Friday, officials said ‘nvm, we’re good.’ The reason for the change of heart: Mexico is agreeing to deploy thousands of troops to the country’s border with Guatemala in the hopes of reducing the amount of migrants headed to the US. And take in more migrants seeking asylum in the US while their cases play out.

Where people took to the polls…

Kazakhstan. Yesterday, it held its presidential election. It was the first time Nursultan Nazarbayev – who led the country since it became independent from the Soviet Union in the 90s – wasn’t on the ballot. Many assumed the authoritative leader would run in next year’s planned elections. But, earlier this year, he unexpectedly resigned and a snap election was called. The former prime minister – and a Nazarbayev ally – Kassym-Jomart Tokayev became acting president, and was expected to win this snap election easily. Although there were seven candidates on the ballot, people showed up to protest saying that the election would not be free or fair. That’s in part due to the fact that Nazarbayev handpicked Tokayev to be his successor. Police detained about 500 people during the protest. Exit polls are currently showing Tokayev in the lead by…a lot.

Who has a little more money in his pocket…

Hugh F Culverhouse Jr. On Friday, the University of Alabama said it’s giving back all the money it had received in donations from Culverhouse, and removed his name from the university’s law school. Culverhouse is a real estate investor and lawyer who was born and raised in Alabama. Last year, he pledged to donate a record $26.5 million to the school. But then, the state of Alabama passed a restrictive abortion law that would make nearly all abortions a felony. Culverhouse called for a boycott of the school and the state over the law. And now, the school is returning his money, saying it was because of his “ongoing attempts to interfere in the operations.” He called the decision a “charade” and pointed to Gov. Kay Ivey (R), who signed the abortion bill into law and is a voting trustee of the school.

Ashleigh Barty. Over the weekend, she won the French Open for her first Grand Slam title. She is the first Australian woman to win the tournament since 1973.

Italy. Yesterday, the team played its first Women’s World Cup game since 1999…and won. And the tournament is just getting started.

When Monday scaries have got you scrolling through Google Flights…

Skimm This. Our daily podcast will have you thinking ‘how about the International Space Station?’ for your next trip. We explain how NASA wants to help make your vacation…out of this world.

What has the Potterhead in your life creeped out…