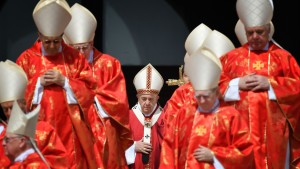 Yesterday, the Vatican issued an official document rejecting the idea that people can choose their genders.

Am I supposed to be surprised?

No. This is on par with traditional Catholic teachings. But this is the first official text from the church on the topic. It says that gender fluidity is part of a "confused concept of freedom." It argues that the growing acceptance of it poses a threat to traditional families. That people who are intersex or transgender make masculinity and femininity "ambiguous." That "God created man in his own image" – and it's male or female. And that the differences between men and women exist for a purpose: to make babies.

Yep. Pope Francis didn't sign the document. But he's previously argued that people can't choose their genders. And he's quoted several times in the document, as are other previous popes.

What was the inspiration behind said doc?

Teaching the children. This doc was created by the Vatican department that oversees Catholic education. The big issue – other than what critics have to say – is timing.

Let's start with the timing…

June is Pride Month. And millions of people around the world are celebrating the LGBTQ+ community. The document is dated back to February this year, so unclear why it was released now. *Looks up the Vatican's address to send calendar*

Say that people don't choose their gender, instead they discover it through experiences. And argue this document will contribute towards discrimination against LGBTQ+ people, and will confuse people questioning their gender identity or sexual orientation.

There are more than 1 billion Catholics in the world – and roughly 70 million are in the US. This may be an attempt by the Vatican to weigh in on countries like the US that have increasingly become more accepting of LGBTQ+ community. While Pope Francis is often seen as a progressive leader, especially compared to other popes, this document doesn't necessarily send a message of inclusivity.

What's breaking all the headlines…

News that Botswana just ended a colonial-era law criminalizing gay sex. It comes weeks after Kenya decided against doing the same. And marks a major advancement for LGBTQ+ rights in Africa, where dozens of countries still criminalize same-sex relationships.

Skimm More: We went deep on the state of LGBTQ+ rights and major pride events around the world in honor of Pride Month.

Mali. Over the weekend, at least 95 people were killed in a growing ethnic conflict. On one side: the Dogon community – known to be hunters and farmers. On the other side: the Fulani community – known to be herders, and often accused by the Dogons of having ties to extremist groups. In the past few months, hundreds of civilians have been killed in attacks between the two. Including back in March, when at least 157 Fulani villagers were killed. Now many are accusing the Fulani of the latest attack in an ethnic Dogon village. But the government still hasn't identified who's behind it.

Who's saying 'did we just become best friends?'…

The DOJ and House Dems. Yesterday, the House said it reached a deal with the department to get some evidence from special counsel Robert Mueller's report. Specifically related to whether President Trump obstructed justice. House Dems have been fighting with the department to get this type of info since March, but the dept wouldn't budge. The House even considered holding Attorney General William Barr in contempt of Congress for not handing over the goods. Now the House says it won't take legal action against Barr or the department, as long as it gets the info.

Skimm This: Our podcast tells you more on why the Mueller report is on the summer reading list for lawmakers in DC.

Canadian PM Justin Trudeau. Yesterday, he announced that Canada is ditching all single-use plastics as early as 2021. Canada's taking a page out of the EU's book, which voted earlier this year to ban single-use plastics to help tackle pollution. Hear that? It's the sound of Mother Nature letting out a sigh of relief.

Skimm More: Read up on how plastic recycling works and what's going on with climate change.

When you decide your budget needs a revamp…

Skimm This. Our daily podcast dives into the latest budget plan in California. If passed, it would give state health coverage to some undocumented immigrants – the first state to do so. Listen in.

When you find "Mission: Impossible" on Hulu…

You ready for a duel, Tom?