Daily Skimm: Sudan, the Gulf, and a New Kind of B-Day Party 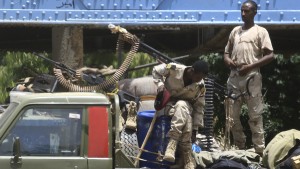 The world is watching the dire situation in Sudan.

Earlier this year, President Omar al-Bashir left office the same way he came into it: with a military coup. During his 30 years as leader, he was accused of leading a genocide in Darfur that killed hundreds of thousands of people and of brutally suppressing dissent. Late last year, people started protesting food shortages and rising prices. That quickly turned into anti-gov protests.

What happened after that?

The military arrested him and said it would take over for two years before holding elections. But pro-democracy protesters said 'we want a civilian gov, and we want it now.' Particularly because many in the military are al-Bashir loyalists. The two sides had been trying to work out a transitional process.

Not good. It started civil, but talks broke down and security forces cracked down on protesters last week. More than 100 people were killed and hundreds more injured. Doctors believe more than 70 people were raped during an attack on a protest camp in the capital. Security forces allegedly committed the rapes. The internet has also been shut off in the country.

The US is sending its top diplomat for Africa to Sudan to call for an end to the violence and to press both sides to resume talks. But it looks like both sides have already agreed to try and talk things out again. After al-Bashir was first ousted, some were hopeful there would be a transition towards democracy. Months later, that still hasn't happened. But both sides seem ready to try to go down that path again.

The Gulf region. Today, reports came out that two oil tankers there were attacked. Everyone's on edge as tension between the US and Iran has gone up in recent months. Japan's been trying to play peacemaker. Now, it says tankers carrying "Japan-related cargo" were attacked. The US Navy says it's in the area to help. This comes after an attack yesterday from Iran-backed militants left dozens injured at a Saudi airport. And weeks after four ships in the region experienced a similar attack.

Who's not afraid to flex their powers…

President Trump. Yesterday, he blocked lawmakers from getting documents around the citizenship Q on the 2020 census. Last year, the admin said it wanted to add a question on next year's census to ask people if they're US citizens. Lawmakers wanted some more info on the decision and subpoenaed the gov for documents back in April. Now Trump's using executive privilege to stop that from happening. The move came right before a House committee voted to hold the attorney general and commerce sec (whose dept oversees the census) in contempt of Congress.

Thing to Know: Executive privilege. The legal principle that presidents don't have to comply with things like congressional subpoenas. The idea is that the White House can work better if presidents can have private convos with their team without worrying about public criticism.

What country buys handcuffs in bulk…

Russia. Yesterday, police arrested hundreds of protesters. Here's their beef: last week, a journalist known for exposing gov corruption was arrested for allegedly attempting to deal drugs. There were protests for days calling for him to be released and accusing the cops of framing him. Earlier this week, the gov surprisingly let him go because of lack of evidence. It also said it would launch an investigation into the officers that arrested him in the first place. But after he got out, thousands turned out to bring attention to corrupt police tactics. A monitoring group says more than 400 people were detained during these protests – including the country's opposition leader Alexei Navalny.

Which states are taking a red pen to the law…

Illinois. Yesterday, the governor signed a bill to protect access to abortion. This comes as a number of red states have passed laws restricting abortions. The Prairie State is repealing a law that punished doctors for performing abortions not considered "necessary." And declaring that a fertilized egg, embryo, and fetus don't have their own rights, as well as ensuring that women's rights "do not hinge on the fate of Roe v Wade."

Nevada. It recently became the first state to ban employers from turning down candidates because their drug tests detect weed. Nevada was the fifth state to legalize the drug back in 2017. With this new law, candidates can retake a drug test if they fail the first one – and employers have to accept the new test results. This wouldn't apply to firefighters, EMTs, or people who operate vehicles for work. And it only applies to weed. The law will take effect in 2020.

Who's not feeling so blue...

The St. Louis Blues. Last night, they beat the Boston Bruins 4-1 to win the Stanley Cup. It's the first time in the team's 52-year history it gets to take the trophy home. And a few months ago, the Blues had the worst record in the NHL. Talk about a turnaround…

When you think baby photos on Facebook are a lot…

Skimm This. Our daily podcast breaks down the latest mom-to-be trend around Brazil. C-section parties. Women get glammed up and welcome their baby into the world…in front of their whole crew.

What's been hidden for way too long…