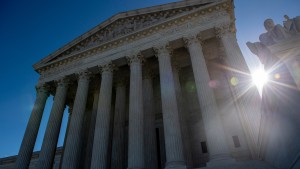 The Supreme Court is airing more opinions than your great aunt at a family wedding.

That time of year, huh.

It is. The last day of SCOTUS's term is next week. But before the Supremes can swap robes for bathing suits, they have to weigh in on a few items. Yesterday, they crossed some off the list – including a case on double jeopardy.

We wish. Double jeopardy: a clause of the Constitution that says people can't be prosecuted twice for the same crime...in most cases. Yesterday, the Supremes ruled 7-2, upholding that a person can be prosecuted twice for the same crime as long as one comes from a state court, the other from a federal court. That's because SCOTUS says the two count as separate sovereigns.

*Nods along, pretends to have a law degree*

In other words: it's bad news for the guy convicted of being a felon in possession of a handgun whose federal and state convictions were just upheld. But it also has implications for President Trump.

I don't get the connection.

He's hinted he might pardon former campaign chairman Paul Manafort, who's serving time on a variety of financial crimes on the federal level. But the state of New York said 'go ahead...we can charge him again anyways.' This latest SCOTUS ruling makes it clear that a Trump pardon can't help Manafort at the state level. But that's not the only case SCOTUS ruled on yesterday.

The. Suspense. Is. Killing. Me.

It's a gerrymandering case (think: drawing up district maps to benefit a certain political party or suppress the voting power of racial minorities). In this case, the Supremes decided 5-4 to dismiss a push by Republican lawmakers from Virginia. The lawmakers wanted to throw out maps that had been drawn to avoid racial gerrymandering. The Supremes said 'no.' Now the maps – expected to help Dems – will stay in place before elections this fall.

The Supremes have around 20 cases to weigh in on before they put up their OOOs next week. That includes more gerrymandering cases (this time, partisan gerrymandering cases), a separation of church and state case, and the highly-anticipated census case – which could have implications for everything from how many House seats each state gets to how federal funding is distributed across states. Stay tuned.

Skimm More: Catch up on the debate around the 2020 census before the court issues a ruling.

Who's saying 'enough is enough'…

The Trump admin. Yesterday, the Pentagon announced that the US is sending another 1,000 troops to the Middle East. If you're thinking 'this definitely has to do with Iran,' you would be correct. Tensions between the US and Iran have gone way up in recent months. Several tankers have been attacked in the region – with some (including the US) pointing the finger at Iran. The US even deployed an aircraft carrier and bombers to the region because of alleged threats made by Iran against US troops. Now, the US is sending backup in response to what it says is "hostile behavior by Iranian forces" that threaten the US and friends. Today, Iran's president spoke upto say that the country is not trying to go to war against anyone.

Skimm This: Our daily podcast goes deep on what it means for Iran to be enriching uranium.

Who's making people say 'what happened?'…

Mohammed Morsi. Yesterday, the former Egyptian president collapsed and died in a courtroom while on trial. In 2012, after the Arab Spring, Morsi – a controversial, senior leader of the Muslim Brotherhood – won Egypt's first democratic presidential election. But the next year, he was overthrown and jailed in a coup led by Egypt's current president Abdel-Fattah el-Sissi. He's been in prison for the last six years and was on trial on espionage charges. Yesterday, Egyptian sources say he fainted and was rushed to the hospital, where he was pronounced dead. He was 67.

What's back in the spotlight…

Myanmar. Yesterday, the UN released a report about its own conduct there. And it's not good. This has to do with the Rohingya, a Muslim minority group in the mostly-Buddhist country that's been discriminated against for decades. In 2017, Rohingya insurgents attacked Myanmar security forces. Myanmar's military responded by systematically burning villages, and killing and raping thousands of people. The UN has described the violence as ethnic cleansing and possible genocide. But the org was accused of ignoring warning signs about the escalating violence. Now, this report says that "even at the highest level of the organization there was no common strategy." And concluded that there was a "systemic failure" with the UN's response.

Ireland. Yesterday, it reportedly unveiled a plan to tackle climate change by moving away from fossil fuels. It has more than 180 steps to get to net-zero carbon emissions by 2050. That includes: carbon taxes, making buildings more energy-efficient, and more electric cars.

...Oh and more than 600 divers in Florida set a world record for largest underwater cleanup.

When you're remembering a fashion icon…

Skimm This. Our daily podcast remembers the life of Gloria Vanderbilt, who died yesterday at 95. She built her own fashion empire (think: designer denim) and grew her company to a $100-million-a-year business. She was also an artist, author, and mother to CNN's Anderson Cooper.

What to say when you hear Katniss is getting a prequel...

I volunteer as tribute...to read it.