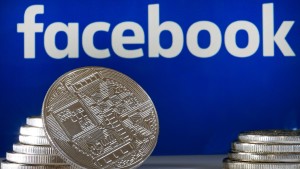 I dated a Libra once.

Sorry that didn't work out. Unlike the OG cryptocurrency Bitcoin, Libra will be backed by real money (like the dollar or euro). Meaning, the value isn't likely to go up and down like your interest in "The Bachelorette." The goal: create an alternative financial system that goes around Wall Street and traditional banking. And allow people to send money as easily as sending a text.

Did something happen to Venmo or…?

Nope, still there. But Facebook is hoping this will be accessible to people who aren't able to get bank accounts. The currency would live in a digital wallet (and Facebook subsidiary) called Calibra that you'd be able to access through Facebook Messenger and WhatsApp.

So Facebook wants to get all up in my business.

It does sound like that doesn't it. And given its track record (see: privacy scandals, spreading fake news, election interference) people are feeling hesitant to trust Facebook with their money. Also, financial regulators will be keeping a close eye on whether it could enable money laundering or drug dealing. But Facebook is saying 'we got you.'

It says it's not running the show – it's teaming up with 27 partners (including companies like Mastercard, Uber, and eBay) to launch a non-profit in Switzerland called the Libra Association that would oversee all this. It also promises that Calibra won't use your financial info for targeted ads. And would only share that info with third parties without consent in "limited cases," like to comply with law enforcement requests or help with functionality.

It thinks so. It's hoping Libra could help the estimated 1.7 billion adults around the world who don't have access to a bank account. And that people in developing countries could especially benefit from it.

Libra is considered one of the biggest attempts by a mainstream company to dip its toes in the crypto pond. If it works. But one thing Facebook has going for it is its more than 2 billion users on its platform and other services. So that'll probably help.

Who's ready for the talent portion…

President Trump. Yesterday, he officially kicked off his 2020 presidential campaign at a rally in Florida. To be fair, Trump never stopped hosting rallies (see: PA last month). But last night's was his big launch party. It also gave the first glimpse into what his campaign will focus on for 2020 – doubling down on attacking political enemies or laying out new goals for his second term.

…Oh and though Trump loves the limelight, acting Defense Secretary Patrick Shanahan does not. Trump says Shanahan pulled out of the confirmation process. This comes after reports over domestic incidents involving his ex-wife.

What's putting on its hard hat...

Google. Yesterday, the company said it would invest $1 billion to create at least 15,000 new homes in the San Francisco Bay Area. In case you needed to Google it, there are about 45,000 Google employees living in the area. Silicon Valley's been accused of taking the housing and homelessness crisis there from bad to worse. Now, Google is saying 'let's share the wealth' and will be repurposing some of the land it owns for housing. It'll also give money to nonprofits focused on things like homelessness and displacement, and create an investment fund to incentivize developers to build more affordable housing. The timing of this announcement comes as protesters are expected to call out Google's impact on housing during a big shareholder meeting today.

Who's doing some apologizing...

California's governor...for the state's treatment of Native Americans. In 1850, lawmakers passed a state law that allowed for Native Americans to be sold into indentured servitude for minor offenses. Among other attacks on Native Americans, the state later paid the equivalent of more than $1 million in today's dollars to subsidize militia campaigns against them. Yesterday, Gov. Gavin Newsom (D) apologized to tribal leaders for the state's "dark history," referring to the treatment of Native Americans as a genocide – with the population falling around that time from 150,000 to 30,000. He's now calling for the creation of a Truth and Healing Council to hear testimony.

Who's got climate change on the mind...

Skimm This. Our daily podcast talks about Boaty McBoatface, the submarine that got its name after a British research council let the public name a new ship. We don't know either. The name went to a submarine on board the ship instead. Now the little submarine that could has made an actual discovery on climate change. Think: stronger Antarctic winds can lead to rising sea levels.

This report from Bloomberg. It says women are missing out on one of the biggest sources for job openings the US has to offer: clean energy. And shows it's an industry still dominated by white men.

When you're in charge of the World Cup watch party...

What's not helping you mind your gap…