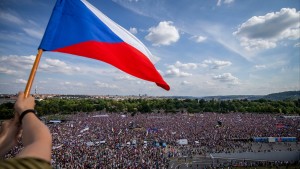 THINGS THAT HAVE SEEN BETTER DAYS

Yes. Anyway, back in March, Erdoğan's ruling party lost local elections in the capital and Istanbul. The country's economy fell into recession last year, which brought rising unemployment and inflation. Erdoğan's been less than impressive in his response. But Istanbul is Erdoğan's home and where he got his political start – so yeah, this hits deep. His party called for a revote, citing irregularities. Yesterday, that revote went down...and the main opposition party candidate won by an even bigger margin.

Make no mistake: Erdoğan's still very powerful in Turkey. But now his party has lost its 25-year dominance over the country's biggest city and economic capital. And some are wondering if this crack could mark the beginning of the end of his authoritarian rule.

Yesterday, the Czech Republic had its biggest protests since 1989.

And by all means, relay them to Taylor Swift. In this case, we're talking about the fall of communism there. Since then, the country joined the EU and made a name for itself exporting cars. Two years ago, billionaire Andrej Babiš became prime minister in a rise to power some have compared to President Trump's. But he's been accused of fraud over EU subsidies for his business. He also recently replaced the justice minister – who could charge him for fraud – with an ally. Ever since police recommended charges against him weeks ago, people have been turning out to protest what they see as eroding democratic norms. Yesterday, an estimated 250,000 turned out in Prague, calling on him to resign.

Babiš may be in trouble but his party is still considered popular. A no-confidence vote this week is expected to fail. But protesters aren't giving up – they're scheduling another meet-up for this fall to coincide with the anniversary of the fall of communism.

Ethiopia's leadership is watching its back after a failed coup.

Last year, the country's prime minister resigned after years of anti-government protests. The ruling party tapped Abiy Ahmed to take his place. He's since tried to make some big changes: opening up the country's economy to investors, releasing thousands of political prisoners, and making peace with Eritrea. But in his short tenure so far, he's already been in danger multiple times (see: this and this). Over the weekend, attacks in various parts of the country left four people dead – including the country's army chief and a regional governor – in what the gov called an attempted coup. The high-ranking military officer who's accused of spearheading the attacks was reportedly working to inflame ethnic tensions and is believed to still be at large.

Many have embraced Abiy's political and economic reforms. But as he's tried to make the country less authoritarian, it's left the door open to a rise in ethnic tensions. Since Ethiopia is Africa's second-largest country and a key US ally in the fight against terrorism in the region, the US is invested in seeing how this turns out.

Who's saying 'gimme the mic'…

President Trump. Last week, he said ICE would start deporting "millions" of undocumented immigrants. He specifically meant migrants who had been handed deportation orders but were still in the US – which meant ICE was expected to start targeting an estimated 2,000 families. The raids were supposed to begin yesterday, but on Saturday, Trump said 'actually...nvm.'

What's standing between the Supremes and their summer break…

The census and partisan gerrymandering. Today's supposed to be the last day of the court's term and it's expected to rule on both issues before putting up their OOOs.

...Oh and speaking of the census, the US Census Bureau is reportedly using aerial tech to help get an accurate headcount in rural and hard-to-reach areas across the country. It's a bird, it's a plane, it's...the US government.

Who's putting out a job listing for 'middle man'…

The US Soccer Federation. Here's the foul: While the US women's games are making more revenue than the men's, women players say they're paid less. So the women's team's 28 players said 'we're not gonna take it' and sued. Now, the federation is agreeing to a mediation process to try to work it out. It'll start once the ladies are done winning at the Women's World Cup.

…Oh and speaking of, the US is playing Spain in the round of 16 today. Get those jerseys ready.

Skimm More: Our app has an audio ep on the women players' fight for equal pay.

When a trip to Diagon Alley is out of your budget…

Skimm This. Our daily podcast talks about the new augmented reality game hitting your phones. If you are wondering why people are suddenly wandering around outside in wizard attire…we'll clue you in.

When David Bowie is your spirit animal…

Is there life on Mars?