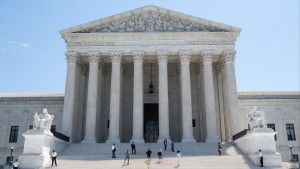 COURT (NOT YET) DISMISSED

The Supreme Court is thiiiiiis close to summer vacation.

Same. This week, the court is handing out rulings on a handful of cases. Then it takes a long break before kicking off its next term in October.

Wish my Summer Fridays were more like Summer July, August, and September…

Again, same. Here are some of the rulings we've been waiting for…

Trademarks…SCOTUS struck down a federal law banning certain trademarks from being registered. The clothing company FUCT (pronounced F-U-C-T, everybody calm down) was founded in 1990, and the designer has since tried to register its trademark. But the gov said 'haha no,' citing a law that bans "scandalous" or "immoral" trademarks. Yesterday, SCOTUS ruled 6-3 to axe the law, saying it violates the First Amendment's right to free speech. As the clothing brand said, "Fuct is free speech. Free speech is Fuct."

The Affordable Care Act…The law set up a three-year program to lower risks for insurance companies and encourage them to join exchanges. The risk being that companies could have lost money on customers who were more expensive than expected. But in 2016, the program expired and some insurance companies lost money. Now, they're saying the gov owes them $12 billion. Yesterday, SCOTUS said 'we hear you, please hold until the next available term for a hearing.'

Census and partisan gerrymandering…two of this year's big-ticket issues. But procrastination gets the best of us, even the highest court in the country. We could have an answer on both of these cases tomorrow. Or not.

The country's top court usually drops rulings on blockbuster issues this time of year (see: legalizing same-sex marriage and upholding the ACA). Now, everyone's waiting on a few key cases that could affect how you're represented in the government, both on local and federal levels.

Skimm More: Read up on the history of the census and its impact on the country.

Who's feeling shut out…

Ayatollah Ali Khamenei. Yesterday, the US barred Iran's supreme leader from accessing the international financial system. Sanctions – against him and eight Iranian military commanders – are in part a response to Iran's downing of a US drone last week. The move brought the US real close

What has the UK's attention…

This abortion case. Last week, a UK court ruled that a mentally disabled woman would have to get an abortion against her will. She had been under the care of the National Health Service, which asked for the court's permission to let doctors terminate her pregnancy. The judge agreed, deciding it would be in her "best interests." That way, she wouldn't have to suffer more mental distress if she had to put the baby up for adoption – even though her mother said she would help care for the child. Since the ruling, the local Catholic diocese, anti-abortion activists, and the woman's mother have voiced their outrage. The mother challenged the court decision and yesterday, an appeals court overturned the ruling. It's still unclear how the woman got pregnant, and an investigation into that is ongoing.

Who's picking up a microscope...

The Treasury Department's inspector general. Last month, the dept said it needed more time to roll out new $20 bills featuring Harriet Tubman. The reason: to protect them from being counterfeited. Last week, Sen. Minority Leader Chuck Schumer (D-NY) questioned the Trump admin's delay and asked the IG to look into whether it was done for "political reasons." Now the IG's saying 'give me 10 months' so he can get to the bottom of this.

Who's practicing their French trash talk...

USA. Yesterday, the women's soccer team beat Spain in the Women's World Cup round of 16. Next up: the US is facing off against Les Bleues during the quarterfinals, this Friday at 3pm ET. Both teams are considered favorites to win the tournament. So yes, now's a great time to ask for Summer Fridays, s'il vous plaît.

...Oh and speaking of people more athletic than you, Italy was selected to host the 2026 Winter Olympics. Don't stop, spaghett-it, get it.

When you're getting equality in new places...

Skimm This. Our daily podcast talks about the new FDA-approved drug: Vyleesi. You may know it by its nickname: 'female Viagra.' Except...it's not a little blue pill, but a pretty big shot.