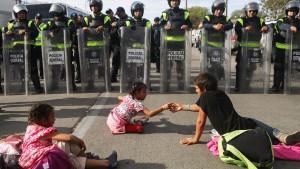 BORDER (OUT OF) CONTROL

The situation at the border is in crisis mode.

Reports came out recently about the conditions for hundreds of migrant children at two Border Patrol facilities in Texas. Doctors and lawyers who've reportedly visited the facilities say kids are sleeping on the floor and lacking adequate food, clean clothes, and supervision. That young kids are caring for toddlers. And that guards created a "child boss" who had to keep kids in line in exchange for more food.

We're not done. Some kids said they hadn't been able to shower in almost a month. And were too hungry to sleep through the night. One doctor said that teens were not able to wash their hands, which she described as "tantamount to intentionally causing the spread of disease." Speaking of, there are reports of lice and flu outbreaks. In one reported incident, guards punished kids who lost a lice comb by taking away their blankets and mats.

What in the world.

That's what everyone said. Since these reports came out, many kids were relocated. But yesterday, about 100 kids were sent back to one of these concerning shelters. Customs and Border Protection (CBP) is apparently denying that things are as bad as these reports say, and claims it's not low on supplies. But it has been asking Congress for help.

Will it get it?

Maybe. Yesterday, the House signed off on a $4.5 billion emergency border aid package. It requires health standards for migrants in custody. The Senate may consider its own bill this week. Meanwhile, the acting head of CBP – John Sanders – will step down next week after two months on the job. It's still not clear why. But the timing has everyone reading between the lines. Oh and that's not all…

Today, some Wayfair employees are expected to stage a walkout to protest the company's selling of mattresses to an org working with the gov on migrant detentions. The employees don't want to benefit from what's happening to migrants. The company said it's standard practice to sell to any company "acting within the laws of the countries within which we operate."

Some in Congress are blaming the Trump admin for its treatment of children. The admin has blamed Congress for dragging its feet on funding...and a broader immigration fix. In the meantime, children are suffering.

What's feeling the need for green…

The UN. A new report says the world is on its way toward "climate apartheid." Think: wealthier people dodging the effects of climate change (by paying to escape floods and droughts) while others may not get to escape as easily. The UN and others have already sounded the alarm on climate change. But this new report says millions could face issues like malnutrition, starvation, and forced migration. And that "democracy and the rule of law" as well as human rights are at risk.

France. The country lost a major case over air pollution. A mother and daughter sued le country because of health problems they say they experienced in Paris. Now the court's saying 'zut, France, you messed up.' And that it didn't do enough to lower pollution levels there. While the court said France was at fault, the country doesn't have to pay damages. While this case was the first of its kind in France, the WHO estimates that 7 million people die every year around the world because of exposure to air pollution.

Skimm More: Read up on how climate change and recycling work.

What DC is buzzing about…

Robert Mueller. He's set to publicly testify on July 17. No, this doesn't have to do with Russia. Yes, we're 100% kidding. Earlier this year, he wrapped up his Trump-Russia report. And last month, he suggested that it's pointless for him to testify to lawmakers because "the report is my testimony" and there's nothing else to add. But yesterday, two House committees said 'we'll be the judge of that' and issued subpoenas to get him talking.

Stephanie Grisham. Meet the new White House press secretary and comms director. She's also still holding down the fort as first lady Melania Trump's spokeswoman. This comes two weeks after press secretary Sarah Huckabee Sanders said 'I'm out, good luck, byeee.' A few things Grisham will need to brush up on for onboarding: this recent rape allegation against the president and the escalating situation with Iran.

The federal debt. Yesterday, the Congressional Budget Office put out an SOS: in the next few decades, the federal debt is expected to rise to the highest level since World War II. And that this could increase the risk of a fiscal crisis. One key reason for the uptick: the gov spending more on things like Medicare and Social Security.

$: What's money got to do with it? Here's what more federal debt could mean for your wallet.

Who's saying 'to inhale or not to inhale, we have opinions'...

Illinois. It just became the 11th state to legalize recreational weed. But Illinoisans (it just rolls off the tongue, doesn't it?) will have to wait a few more months to light up: the new law goes into effect in January.

San Francisco. It's set to become the first city in the US to ban e-cigs. Yesterday, the city's board of supervisors said 'aye' to the ban. Now it's up to the mayor to give it the thumbs up, which she's expected to do.

When you think back to your Popeye days…

Skimm This. Our daily podcast talks about spinach…and a certain chemical in the leafy green. German scientists say this chemical is so powerful that it should be added to the list of banned doping substances for international athletes. We'll never look at Popeye the same...

...Oh and once athletes put the spinach down, they can pick up breaking (aka breakdancing for normal folks). It's one step closer to becoming an Olympic sport. Grabbing our boombox and we're there.