Daily Skimm: Dem Debates: Night 2, the Supreme Court, and the Golden Girls of the G20 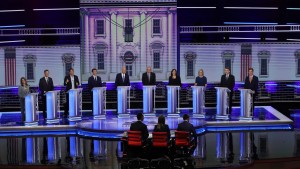 Can we rewind for a sec?

Let's do that. The first round of candidates went on the stage earlier this week. Sen. Cory Booker (D-NJ) and former HUD Sec Julián Castro made headlines. But Sen. Elizabeth Warren (D-MA) held her own and then some. Overall, Wednesday's debate was a fairly civil discussion of issues like health care, immigration, and the cost of college. Last night, not so much…

Think: chaos, people talking over each other, and something about themoon landing? Many candidates agreed that China is a threat. All said that the government should provide health care for undocumented immigrants– showcasing how the Dem base has moved to the left. But if you heard a lot of people talking on the mic at the same time...it wasn't NBC's fault. These candidates came with their gloves ready.

What was the big issue of the night?

Most on her game...Sen. Kamala Harris (D-CA). She's known for being a firecracker in the Senate. And it was on full display last night. She challenged Biden on issues of race, segregation, and busing. She got everyone to chill out and stop yelling at each other. And she gave her supporters a glimpse at what she'd look like in the ring against President Trump.

Most likely to need a helmet...Former VP Joe Biden. As the front-runner in the race, he was on defense all night. For his voting record in the Iraq War, his relationship status with segregationists, and his age. But if you want his torch, you'll have to come and get it. He made the health care debate personal. Reminded you of his bromance with former President Barack Obama. And may or may not understand what it means to raise his hand.

Most likely to say 'hey ladies'...Sen. Kirsten Gillibrand (D-NY). She stayed focused on reproductive health and paid family leave, and was all about jumping on Sanders's Medicare for All bandwagon.

Most likely to never change...Sen. Bernie Sanders (I-VT). He stuck to his script on billionaires and the top 1%, special interests, Medicare for All, you know the drill.

Most likely to listen to podcasts on 1.5x speed...Andrew Yang. He's here for one thing and one thing only: to give every American adult $1,000/month, no questions asked. Trickle up for what.

Most vying for the title of 'Millennial President'...Rep. Eric Swalwell (D-CA) and South Bend Mayor Pete Buttigieg. Until yesterday, Mayor Pete looked like he had the millennial thing on lock. But Swalwell came out swinging with his "pass the torch" anthem. And kept it up with his focus on gun violence.

Most likely to be at a different event...Marianne Williamson.

The first debate is in the books. And while Biden and Sanders walked in as front-runners, Harris seemed to walk out as one.

What the Supreme Court hit its gavel on yesterday…

The 2020 census. The court ruled 5-4 to not allow a citizenship question on the census…for now. Commerce Sec Wilbur Ross said he wanted to add the question to help protect minorities' voting rights. But opponents pointed out that the question could scare off undocumented immigrants and citizens in immigrant communities from filling it out. At first, the court's conservative majority was expected to greenlight the admin's move. But evidence came out showing Ross wanted to add the citizenship question close to his first week on the job – making people say 'politically motivated much?' The admin can still keep trying to add the citizenship question...if it can provide a better reason.

Partisan gerrymandering. The court also ruled to let state lawmakers draw electoral maps to benefit their party – adding that federal courts need to stay out of it. The rationale: there's nothing in the Constitution that says partisan gerrymandering isn't allowed. Technically. And that it's up to lawmakers to outlaw this practice. Chief Justice John Roberts flagged that voters could take matters into their own hands (see: Colorado and Michigan). Justice Elena Kagan gave a forceful dissent, saying that the court failed in its basic duty to protect the foundation of US democracy: "free and fair elections."

$: What's money got to do with it? Here's what a citizenship question on the census could mean for your wallet.

Twitter. Yesterday, it said it's going to start putting warning labels on some tweets from major political figures. Over the past few years, some have called Twitter out for not applying its rules against bullying and abusive behavior to big-league politicians like President Trump. Twitter has resisted taking them down. But now it says it will still keep those kinds of tweets up because there may be "public interest" in seeing them. But it'll shame them with a big old warning sign.

The Dutch railway. During World War II, it transported around 100,000 Jews as well as other minorities toward Nazi death camps. The railway recently set up a committee to acknowledge the company's role during the war and propose how to compensate survivors, victims, and their families. Based on the recommendation, the railway is getting ready to pay out tens of millions of euros.

Where world leaders are gathering…

The G20 summit. Today, leaders from 19 countries and the EU are huddling in Osaka, Japan. Keep an eye out for leaders to address climate change and Iran. Russia's already handled.

…Oh and the latest episode of our podcast "Skimm This" talks about a group of singing and dancing grannies who released a rap video to welcome all the out-of-towners to the summit. Cardi, they're coming for you.

When you see Kristen Stewart kill it in the new "Charlie's Angels" trailer...

Get ready to see more women kill it during today's Women's World Cup game. It's la France vs the US of A. Whoever wins heads to the semifinals. No pressure.