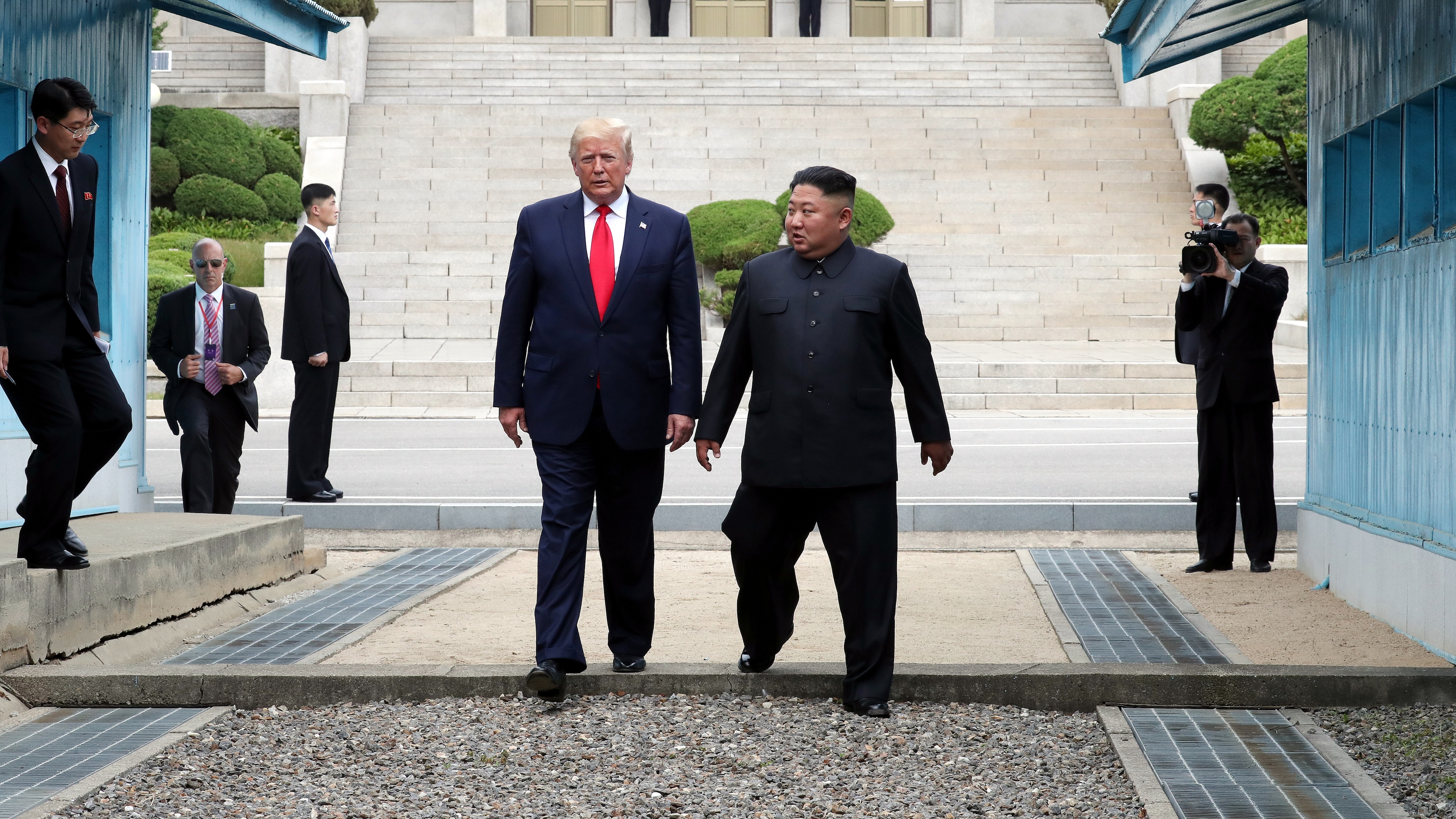 Yesterday, President Trump made a surprise visit to North Korea.

Don't even get me started on unexpected guests...

North Korean leader Kim Jong Un didn't seem to mind. Trump was in the area for the annual G20 summit. On Saturday, he put out into the universe that he'd love to stop by the Demilitarized Zone separating North and South Korea...and meet with Kim if he was free.

So if I tweet at Beyoncé, she'll agree to meet with me?

No. But, Kim made it work. Yesterday, Trump stepped into North Korean territory, becoming the first sitting US president to do so. Then they had an hour-ish long discussion during which they agreed to restart nuclear talks.

Maybe. Last year, the two leaders met, "fell in love," and agreed on a vague plan to denuclearize. Think: no timeline, next steps, or even a shared definition of "denuclearization." Since then, North Korea announced an end to its nuclear tests and sent detained Americans back home. But it's also launched short-range missiles in violation of UN resolutions.

So where do we stand?

The talks fell apart a few months ago. But in recent weeks, Trump and Kim have been writing letters that, by all accounts, put Noah Calhoun to shame.

How does this affect whether North Korea remains a nuclear threat?

It's not clear. But because of the pen pal situation, Trump seemed comfortable springing this last-minute, historic meetup on Kim. Now, Sec of State Mike Pompeo and friends are tasked with succeeding where they failed before: turning the Kim-Trump friendship into a nuclear deal.

The key question. Trump plans to invite Kim to the White House. But we've been here before: Trump and Kim complimenting each other in public but refusing to budge on meaningful steps behind doors.

This is all happening as the race for 2020 is heating up. Trump may be looking to kickstart a foreign policy win. Meanwhile, Democrats are struggling to define their positions on North Korea in contrast to a president whose strategy can't easily be pinned down.

Skimm This: Let's not forget about what went down before Trump went to North Korea. Listen to what the buzz was about at this year's G20 summit in Japan.

Hong Kong. Today, police are facing off with pro-democracy protesters. Last month, hundreds of thousands of people took to the streets to protest a bill that would have allowed Hong Kong to extradite some criminal suspects to China and Taiwan. At one point, police fired tear gas and rubber bullets on protesters. It's been the city's biggest political crisis in decades. Hong Kong's leader apologized and hit the pause button on the bill. But that hasn't stopped the protests…

Sudan. Yesterday, an estimated tens of thousands of people protested to demand a civilian-led government. Earlier this year, the military forced former President Omar al-Bashir out of power and took over. After that, the military had been negotiating with protesters on how to move forward. But a crackdown on protesters last month left at least 128 people dead and stalled talks. Yesterday, protesters turned out in the largest protests since the violent crackdown. At least seven people were killed and more than 180 were injured.

What people have been celebrating…

Pride. Over the weekend, an estimated millions across the US and the world celebrated Pride. This year marked the 50th anniversary of the Stonewall Inn uprising in New York City – a major moment in LGBTQ+ history.

Skimm More: Catch up on LGBTQ+ history and celebrations around the world.

What has people frustrated…

This CBS News investigation. It found that almost 30 years since the Americans with Disabilities Act became law, the Justice Department is still getting complaints about missing or incorrect braille at public facilities across the US. Example A: the Franklin Delano Roosevelt Memorial, where the braille was too oversized to read. The National Parks Service said that the braille was "part of the artist's design" and not "necessarily intended" for accessibility.

What's big in the sports world...

Skimm This. On Friday, the US beat France 2-1 in the Women's World Cup. Our daily podcast talks about the star player making buzz on the team. Listen in. NBA free agency. As of yesterday at 6pm ET, teams are allowed to reach out to players whose contracts have expired (aka free agents) and say 'pick me, choose me, love me.' While teams aren't allowed to officially sign players until 12pm ET on July 6, many are already channeling Cardi B and making money moves. That includes the Brooklyn Nets who are expected to sign Kevin Durant and Kyrie Irving.

That'll be us, if we don't get Melissa or Lizzo.

What beef has people taking sides...