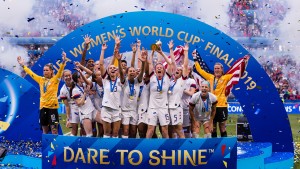 THINGS WITH POWER ON THE BRAIN

On Friday, Sudan's military agreed to share power with protest leaders for three years. They also agreed to create a joint council that will run the country as it transitions toward civilian rule. And to investigate the deadly crackdown on protesters last month, which left more than 100 people dead. The details of the deal are supposed to be finalized today.

If successful, this could mark the end of decades of dictatorship and months of instability following the overthrow of President Omar al-Bashir in April. Many celebrated the news. But with years to go before any election, it remains to be seen just how much the military is willing to step aside.

The move from a populist to a more mainstream party goes against the current trend in Europe. But it happened against a backdrop of Greece's years-long economic crisis, which the country's still recovering from. Now, Mitsotakis – a former banker and the son of a former PM – is hoping to speed up economic recovery by doing things like lowering taxes and bringing in foreign investment.

Yesterday, Iran said it had started enriching uranium beyond the limits set in its 2015 nuclear deal. Here's why that matters: the deal kept Iran about one year away from having enough high-enriched uranium to build a nuclear bomb. As Iran continues to break the deal, that window could start to narrow.

If this sounds familiar, it's because this is the second time in the span of a week that Iran has said 'yoohoo, we've broken the deal.' It's hoping that advertising this will push Europe to help it avoid severe US sanctions on its oil industry. It's giving Europe 60 days to find a fix. Or else, Iran threatens to inch closer and closer to nuclear weapons territory.

Who's singing 'We Are the Champions'...

The US women's national soccer team. Yesterday, the champs defeated the Netherlands 2-0 to win the Women's World Cup for the fourth time, their second title in a row. (The only other country to ever win more than one Women's World Cup was Germany, with two.) Who. Run. The. World.

The Los Angeles Clippers. Over the weekend, the NBA team snatched up Kawhi Leonard and made a stunning trade to get Paul George from the Oklahoma City Thunder. California, here they come.

Who got hit with new charges...

Jeffrey Epstein. Over the weekend, the billionaire was arrested on sex trafficking charges. Epstein: the well-connected guy accused by dozens of girls in Florida of sex trafficking and child molestation. In 2008, he reached a secret plea deal with the US attorney's office there – and managed to avoid federal charges. For that, he can thank current Labor Sec Alex Acosta. Last year, the Miami Herald dropped a bombshell report on the allegations against him, bringing renewed attention to his case and how it was handled...including by Acosta. Now, federal prosecutors are charging Epstein with sex trafficking of underage girls, reportedly linked to allegations that he lured dozens of girls to his home in New York.

President Trump. Last week, the Justice Dept said it gave up on the idea of adding a citizenship question to the 2020 census. This was after the Supreme Court said it didn't buy the admin's reason for adding it. But then Trump went full Dido and refused to throw up a white flag. Now, he's made it clear he's committed to adding the question. He says he's considering an executive order to make it happen. And the Justice Department is switching up its legal team handling census-related cases. But time is running out – the gov has already started printing census forms without a citizenship question.

When you've had one too many hot dogs over the long weekend...

Skimm This. Our daily podcast talked about America's favorite 4th of July food, and how many were consumed over the weekend. Eat it up.

When you can't wait for the new "Mulan" to come out...

Did you hear there's a new Ariel too?

When your friend says she needs a new TV show...