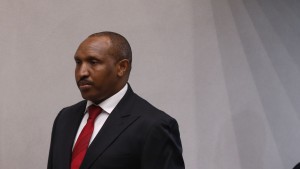 THINGS LAYING DOWN THE LAW

Yesterday, Italy sentenced 24 people to prison for their role in Operation Condor.

Am I supposed to know what that is?

That's why we're here. Let's take it back to the 1970s and '80s in South America. Six countries – Chile, Paraguay, Uruguay, Brazil, Bolivia, and Argentina – conspired to help each other kill and kidnap an estimated hundreds to thousands of people. The reason: these countries, led by military dictatorships, wanted to crack down on left-wing activists and political opponents. So they agreed to share intel and help each other track down dissidents.

Why did it take decades for anything to happen?

Well, a few years ago, Argentina became the first country to convict people for orchestrating the plot. But 23 Italians were included among the dead, and Italy's gotten involved. The country's already convicted people related to this plot in the past – including former presidents of Bolivia and Peru. Yesterday, it sentenced dozens to life in prison, many reportedly in absentia. In other words, it's not clear who – if anyone – will see prison time in Italy.

This trial represents justice for some of the victims – but there are still countless people whose stories remain unknown.

Yesterday, the ICC convicted a Congolese warlord for war crimes.

I'm going to need some context.

The Democratic Republic of the Congo has long struggled with violence. Since the late 1990s, tens of thousands of people have been killed as rival militias compete for control over the region's key resources (think: gold mines, land).

And this warlord is...

Bosco Ntaganda – known as "the Terminator." He was the deputy chief of staff and commander of a rebel group that carried out an ethnically-motivated massacre in the early 2000s. The court found Ntaganda personally responsible for ordering the massacre, which left at least 800 people dead.

That's not all: he was also found responsible for a total of 18 counts of war crimes and crimes against humanity – including murder, rape, and the use of child soldiers. He was indicted by the ICC in 2006, but didn't face consequences until 2013 when he turned himself over. Reports say he was fighting with a rebel group, and turned himself in as a way to stay alive.

What's next for him?

Ntaganda still has to be sentenced by the court, but he's expected to get life in prison. He has 30 days to appeal.

The verdict is seen as a warning sign to other abusive warlords who have gone without facing the consequences. It's also seen as a win for the ICC, which has struggled to retain credibility after prosecutors failed to convict multiple high-profile leaders on similar charges.

What people are asking for…

#JusticeForElijah. On July 4, a white man in Arizona allegedly killed 17-year-old Elijah Al-Amin. According to police records, the man admitted to killing Al-Amin because the teen was playing rap music. The suspect said the genre made him feel "unsafe" because he'd been attacked by people who listen to rap in the past. He also apparently said that he acted proactively because he said people who listen to it pose a threat to him "and the community." The suspect had been released from prison just last week. His lawyer claims he suffered from a lack of access to mental health services after getting out. He's been charged with first-degree murder and is being held in jail.

Deutsche Bank. Yesterday, it started firing people in the US and abroad. The German bank is ending its equities sales and trading business and cutting down on its investment banking as part of a major restructuring plan to become more profitable. This comes after a failed merger, and a not-so-hot European market. Now, employees – especially in New York and London, where a lot of the investment banking jobs are – have their guard up. The company says it'll cut 18,000 jobs by 2022.

This study. Yesterday, the nonpartisan Congressional Budget Office released new figures about what could happen if the US passed a $15 minimum wage. The good news: it would boost pay for 17 million people and lift 1.3 million people out of poverty. The bad: it would lead to 1.3 million people losing their jobs as companies look to cut costs. All of this is timely, since House Democrats are expected to vote on legislation calling for a $15 minimum wage later this month. Expect presidential candidates on both sides of the aisle to cherry pick one or another of these figures as they make their pitch for 2020.

$: What's money got to do with it? Here's what raising the minimum wage could mean for your wallet.

Who's facing the music...

Skimm This. Yesterday, financier Jeffrey Epstein pleaded not guilty to charges of running a sex trafficking ring. Our daily podcast gives you the background on who he is and why you'll be hearing about him for a while

When seeing someone on a scooter is enough to ruin your day...