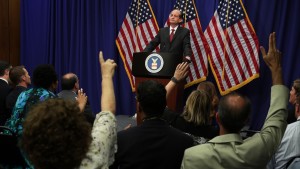 CAN YOU FEEL THE HEAT

Labor Secretary Alex Acosta is playing defense over how he handled the Jeffrey Epstein case.

I know their names but could use a refresher.

Epstein's a well-connected billionaire. By well-connected we mean...he spent time with President Trump, former President Bill Clinton, and Britain's Prince Andrew. Acosta was the US attorney in Miami. Now, he's the labor secretary – and part of his department's job is to combat sex trafficking.

Got it. So what's going on?

Epstein has been accused by dozens of girls of child molestation and sex trafficking dating back to the early 2000s. Last year, Miami Herald reporter Julie K Brown dropped a bombshell investigation into a backdoor plea deal he got in 2008, which many thought was essentially a slap on the wrist.

When you say slap on the wrist…

He avoided federal charges, pleaded guilty to just two solicitation of prostitution charges, and served 13 months in jail with permission to leave six days a week (count them, six). For context: he could have faced life in prison.

Ask Acosta. As the US attorney in Miami at the time, he was responsible for cutting the deal. Brown's reporting brought renewed accusations that Acosta had been too lenient on Epstein. He's defended his handling in the past. Now he's in the hot seat again.

Earlier this week, Epstein was hit with new federal sex crime charges in New York. And people are now calling on Acosta to resign as labor secretary over all this. Yesterday, Acosta piped back up to defend his actions, claiming the deal was the best he could've gotten without letting Epstein off scot-free. This comes as yet another woman spoke out, accusing Epstein of raping her when she was 15.

This is all making me nauseous.

Yup. And former Palm Beach County State Attorney Barry Krischer denounced Acosta's claims, saying they're "completely wrong." And that secret negotiations took place between Epstein and Acosta back in the day that led to the plea deal.

The House Oversight Committee has scheduled a hearing on Acosta's actions later this month – and has asked him to testify at it. Unclear if he will. But he has Trump's vote of confidence. For now.

The accusations against Epstein have been quietly growing for years. Now that his alleged actions are starting to come to light, it's putting the spotlight on a lot of powerful people and their connections to him. And that spotlight is not going away any time soon.

Not getting sued. Yesterday, a federal court dismissed a lawsuit over the Trump hotel in DC. The case – brought by Maryland and DC – argued that Trump was violating the Constitution's emoluments clause when gov officials visit the hotel (reminder: the clause restricts leaders from receiving gifts from foreign governments). But the judges disagreed, calling the argument so weak that it begs the question of whether this case was "an appropriate use of the courts."

One less critic. Yesterday, the UK ambassador to the US quit. This was after recent leaked memos showed he had criticized the Trump admin, calling it "inept" and "chaotic." As a result, President Trump ghosted the rep for one of the US's closest allies. So the ambassador submitted his resignation, saying it's no longer possible for him to do his job.

...Oh and now Rep. Alexandria Ocasio-Cortez (D-NY) gets to walk a mile in Trump's shoes. Earlier this week, a court ruled that Trump can't block critics on Twitter on First Amendment grounds. Now, AOC is getting sued using the same argument.

Who's got interest rates on the brain...

Skimm This. Our daily podcast talks about an appearance from Fed chair Jerome Powell on Capitol Hill yesterday. He hinted that he could lower interest rates later this month. Something that hasn't happened since 2008. The news made the stock market happy. The S&P 500 jumped to above 3,000 points for the first time after Powell's testimony, meaning people are stocking up. Literally. The reason: low interest rates make stocks more appealing to buy.

$: What's money got to do with it? Here's how interest rates affect your wallet.

What's older than the gum at the bottom of your bag...

This skull. Researchers discovered that a fossil found in Greece is about 210,000 years old. Why scientists are in freakout mode: it shows our species left Africa at least 16,000 years earlier than we thought. And that Greece was apparently a go-to destination spot even back then. Some things never change.

Who's twinning more than Hallie Parker and Annie James...