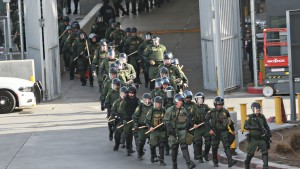 This weekend, Immigration and Customs Enforcement (ICE) is expected to start arresting thousands of people across the US.

Sunday. President Trump had said he would start deporting "millions" of undocumented immigrants last month. But then he said 'let's wait a second' – and that he would give Congress a couple weeks to find a way to address the influx of migrants at the US-Mexico border.

And in that time…?

Congress passed a humanitarian aid package to improve conditions for detained migrants at the border – but Trump wanted more. Now, his admin is moving full steam ahead with these raids.

Tell me about them.

ICE agents are expected to arrest people who were already ordered to leave the US, and could arrest other immigrants they encounter. Officials reportedly say they're targeting at least 2,000 people. These raids are scheduled to happen in LA, NYC, SF, and several other cities, lasting for days. New Orleans not included...for now.

Raids scheduled there will be suspended because of Tropical Storm Barry.It's worth noting: usually when these raids happen, admins don't tip people off in advance. In this case, Trump did – which could result in fewer arrests.

Back up. You said 'usually when these raids happen'...

They've happened under every admin since ICE was created in 2003 (see: Bush, Obama). And have at times resulted in hundreds of arrests.

I still can't see Dems staying quiet on this.

They're not. Many are calling on Trump to quit it with the raids business – saying they're "cruel." 2020 presidential candidate Sen. Elizabeth Warren (D-MA) said 'I've got a policy for this' and dropped her immigration plan yesterday. Also, the ACLU filed a pre-emptive lawsuit to protect people from deportation, saying refugees need to have their hearings first. And advocacy groups and prominent Dems are prepping immigrant communities with info about their rights.

The Trump admin's plan for dealing with the influx of migrants at the border has been to try to use tactics to deter them from coming – see: separating families, trying to build a wall, and now this. Time will tell if these highly publicized raids will drum up support from his base, lead to lawmakers taking action, or cause a similar crisis as last year.

Who's getting muted behind bars...

R. Kelly. Yesterday, the singer was arrested in Chicago for federal charges related to sex crimes. Earlier this year, he got hit with felony charges, some that carry a maximum sentence of 30 years in prison. He pleaded not guilty and was out on bail. This comes after decades of sexual misconduct accusations from underage girls. And a renewed spotlight on them thanks to a bombshell documentary that came out earlier this year. The New York Police Department and Department of Homeland Security investigators helped arrest Kelly yesterday.

France's new tax. Yesterday, lawmakers voted for a first-of-its-kind tax on tech giants. The country's not amused that these companies can dodge taxes there because their HQs are elsewhere. Now it wants Facebook, Amazon, Google, and others to pay up based on revenue they make in France. The country's president is expected to sign off on it.

Automation. Yesterday, Amazon said it'll spend $700 million to retrain about a third of its US workers. As automation threatens people's jobs, Amazon's offering a range of skills – like nursing – that employees could use in (or outside) the company. Amazon says it's "important to invest in our employees."

…Oh and Jeff Bezos isn't done taking over the world. Brace yourselves for Alexa MD.

Who's letting his white flag fly…

President Trump. He's giving up on his attempts to add a citizenship question to the 2020 census. Last month, the Supremes blocked the admin from adding it, saying it didn't have a good reason for including it. Recently, there were reports that Trump was going to do the damn thing himself and take executive action to get the question on the census. But now he's ditching his census dreams. Instead, he says he'll order federal agencies to hand over data on people's citizenship statuses. Plot twist: this is something that the gov apparently already does.

Where women may be getting some overdue freedom…

Saudi Arabia. The kingdom is reportedly set to loosen travel restrictions for Saudi women. Currently, women need permission from a male relative to travel outside the country. But Saudi Arabia could change the rules later this year, and let women over 18 go international without getting permission slips signed. In recent years, the kingdom has said 'look at me, I'm joining the 21st century' (see: this and this). But it's a slow process: apparently, women still need permission to get hitched, leave prison, or leave an abuse shelter for victims.

Who has "making history" on their resume...

Skimm This. Our daily podcast is talking about Sarah McBride – who's running to be the nation's first openly transgender state senator. Other firsts on her resume: first openly transgender White House intern and person to speak at a major political party's national convention. If she wins, she'll apparently join 728 other openly LGBTQ+ elected officials around the country. Listen in