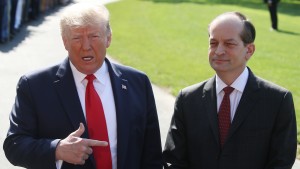 THINGS SHAKING UP THE GOVERNMENT

Labor Secretary Alex Acosta is on his way out.

Yup, he announced his resignation on Friday. Before Acosta was labor secretary, he served as a prosecutor in Florida and cut a controversial plea deal in 2008 with Jeffrey Epstein. Reminder: Epstein was accused of sexually abusing dozens of girls and could've been hit with federal charges. But this deal let him plead guilty to just two state prostitution charges and serve 13 months in jail. Oh, and with permission to leave six days a week.

Exactly. Attention is back on Acosta after Epstein was hit with new federal sex trafficking charges in New York last week – specifically people are looking at Acosta's handling of the deal, which his team kept secret from the victims. Acosta piped up to defend himself, claiming the deal he cut was better than other options at the time. And ignored calls to resign. Two days later, he said 'alright, alright, I'll see myself out.'

I'm getting whiplash. What changed?

He said he didn't want his role in the Epstein case to be a distraction for the admin. President Trump called Acosta a "great, great secretary" and a "tremendous talent."

What's next for the Epstein case?

As Acosta announced his resignation, federal prosecutors in New York alleged that Epstein had attempted to pay off potential witnesses in the past. Today, a court will decide whether to release him on bail.

Ever since the Miami Herald investigation last year, there's been renewed pressure for accountability over this case – for Epstein and those that enabled him. Now, one of the country's top federal officials is packing his bags. But whether or not there'll be further accountability for Epstein, or anyone else, remains to be seen.

Over the weekend, President Trump suggested progressive Democratic congresswomen should "go back and help fix the totally broken and crime infested places from which they came." People weren't amused.

Yesterday, he claimed that congresswomen who came from governments that are a "complete and total catastrophe" shouldn't be criticizing how the US gov should be run. And should fix the problems in the countries they came from first. Many quickly slammed the tweets as racist. Pelosi said the comments show Trump's plan to "Make America Great Again" is really about "making America white again." All of the reps believed to be the targets of the tweets are women of color. All of them are US citizens. And three of them were born in the US.

The President of the United States is apparently using his platform of nearly 70 million Twitter followers to tell congresswomen of color to 'go back where they came from.' Let that sink in.

What's looking at the tab and saying 'psh, I got this'...

Facebook. The Federal Trade Commission signed off on fining the company roughly $5 billion for mishandling users' data. This was about the Cambridge Analytica scandal, when Facebook shared users' info without their permission. If the Justice Dept approves, it'll be the biggest fine in the agency's history.

Skimm This. ICYMI, our daily podcast talked about the long-term rivalry of Roger Federer vs Rafael Nadal. The two faced off in the Wimbledon men's singles semifinals on Friday. Spoiler alert: Federer won. But then he faced off against...

Novak Djokovic. Yesterday, the returning champ beat Federer in the men's singles final. It was the first Wimbledon final to use the new tiebreaker rule that was created last year. The goal: no more marathon matches. But it still managed to take the cake as the longest Wimbledon men's singles final ever at 4 hours and 57 minutes. Our legs are tired just thinking about it.

Simona Halep. Over the weekend, she beat Serena Williams in the Wimbledon women's singles final. While Williams lost her shot at a record-matching 24th Grand Slam title, Halep became the first Romanian to win a Wimbledon singles title.

What's even more motivating than the "The Lion King" soundtrack...

Taking control of your health. New studies show that a healthy lifestyle including regular exercise and a more veggie-heavy diet might be able to reduce your risk of dementia, including Alzheimer's. So stock up on those greens after your run tonight.

Everything, including this baby.