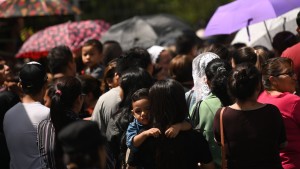 The Trump admin is ending asylum protections for most migrants who arrive at the US-Mexico border.

Yes. This new rule applies to those who arrive at the border after going through another country. Instead of being eligible for asylum in the US, they'd have to claim asylum in the first country they pass through. There'd be exceptions for victims of human trafficking. But not for children traveling on their own. All of this was announced yesterday, and is supposed to go into effect today.

Sounds like a lot of people will be impacted by this.

Potentially hundreds of thousands. Many come from Guatemala, Honduras, and El Salvador – an area in Central America called the Northern Triangle, known for high levels of poverty and violence.

Got it. I'd love an explainer on how asylum protections work.

It's like refugee status, except people apply for it once they're already in the US or at a port of entry. Those applying are looking for protection from violence or persecution back home over things like their race, religion, or political opinions.

Do most people get approved?

No, only a fraction (reportedly 15-20%). It's worth noting: immigration courts are backlogged with these cases.

And the reason for the change is…?

President Trump wants to lower the number of migrants coming to the US-Mexico border, which reached record highs this year. This comes months after the admin decided to make asylum seekers wait out their US court cases in Mexico. And after reports came out on poor conditions at some migrant detention centers near the border. Dozens of Customs and Border Protection employees are also being investigated for allegedly mocking migrants in a secret Facebook group.

I'm gonna go out on a limb and guess that people aren't happy about this.

You're not wrong. The ACLU has said it'll sue, calling the change "patently unlawful." This was all announced after Guatemala's president canceled his visit to the US because of disagreement over whether Guatemala should be a "safe third country" – meaning if migrants get there first, they would need to apply for asylum there. Mexico's saying 'don't look at us either.'

The Trump admin's move is a reversal of decades of US policy. And is seen as the latest step in the admin's mission to overhaul the immigration system.

The Democratic Republic of the Congo. The Ebola virus has reached the eastern city of Goma, on the border with Rwanda. Ebola: the deadly disease that starts out like the flu but can lead to internal and external bleeding and hemorrhaging. Since last year, more than 1,600 people have died in the second-worst outbreak in the world. Health experts were worried it could reach Goma, home to about 2 million people and a transportation hub for central Africa. Now a case has been confirmed. It's not the only thing the DRC is dealing with – there's also a deadly measles outbreak. Since the start of 2019, there have been more than 100,000 recorded cases. Nearly 2,000 people have died, most of them children under the age of five.

The United Nations. A new report says more than 820 million people around the world are facing hunger. And that the target of reaching zero hunger by 2030 is an "immense challenge." The number of people without enough to eat has gone up for the third year in a row. And while hunger is still widespread, obesity – which is also related to malnutrition – continues to rise.

Who's checking its cart...

Skimm This. Our daily podcast dives into the other side of Amazon Prime Day, when workers at Amazon facilities from Germany to Minneapolis walked out in protest. What was on their list: better pay, working conditions, and company culture. They say there's too much pressure to fulfill delivery orders, which could get worse as Amazon moves to one-day Prime shipping. Amazon's response: it's defending its current $15-per-hour wage, which it says is above industry standard.

What's moving slower than dinner planning in a group text..

China's economy. Yesterday, China said it grew at the slowest rate in nearly 30 years. It's happening despite massive tax cuts and infrastructure investment. If you're thinking this might have to do with the US-China trade war, you're on the money.

When Norah O'Donnell becomes the next anchor of "CBS Evening News"…

It is worth it. Let her work it. Just like Missy Elliott.