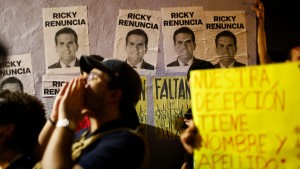 Puerto Rico is dealing with a scandal straight out of “Scandal.”

Meet, Gov. Ricardo Rosselló. He’s been in office for more than two years and had to deal with the grappling effects of Hurricane Maria. Recently, he’s been facing calls to resign after a government corruption scandal resulted in at least two arrests. He wasn’t directly linked though. But that’s just the tip of the iceberg.

Over the weekend, nearly 900 pages of chats between the governor and people in his inner circle sent via the encrypted messaging app Telegram were released. It’s pretty alarming.

There’s a lot, but here’s a preview: Rosselló called a former NYC council speaker a “whore.” He said San Juan Mayor Carmen Yulín Cruz – who’s running against Rosselló for governor in 2020 – was “off her meds.” When the governor’s chief financial officer wrote he wanted to shoot her, Rosselló said he’d be doing him a favor. The chat also included homophobic references about Puerto Rican star Ricky Martin. And middle finger emojis directed at a federal board overseeing the island’s finances.

The scandal is being called “Chatgate” and “Rickyleaks.” At least four people in the chat have either resigned or been fired. Thousands of protesters have been calling for Rosselló’s resignation. Earlier this week, police used tear gas and pepper spray against protesters in front of the governor’s mansion. And on Twitter, #RickyRenuncia (Ricky Resign) was trending.

It’s not. Yesterday, Rosselló said ‘I’m not going anywhere,’ and that he hadn’t done anything illegal, just something inappropriate. He also condemned demonstrators, saying they threatened others’ safety. Some lawmakers are hinting at impeachment, but it’s unclear if that movement would get traction there. The White House said this scandal proves that President Trump’s “concerns about mismanagement, politicization, and corruption have been valid.”

If Rosselló were to step down, the official that’s next in line would have been the secretary of state. But…that person already resigned over the scandal. Rosselló seems to be hoping that it won’t come to that if he can ride things out. TBD if that works for him.

Eric Garner, the unarmed black man who was killed five years ago today. Yesterday, it came out that the New York City police officer accused of killing him won’t face federal charges. In 2014, officers arrested Garner for allegedly selling untaxed cigarettes. One officer was caught on video putting him in an apparent chokehold that killed him. The officer’s lawyer claimed he did so because Garner was resisting arrest. Garner’s last words “I can’t breathe” became a rallying cry against police brutality and helped spark the Black Lives Matter movement. The officer has been on desk duty since – he’s faced a disciplinary trial on all this and could still get fired.

The House. Yesterday, it passed a resolution to condemn President Trump’s recent comments about four congresswomen of color. Specifically, he said they should “go back” to where they came from. Worth noting, they’re all US citizens and three out of four were born in the US. Many have called out the president, saying ‘no doubt about it: that’s racist.’ But Trump disagrees and said, “I don’t have a racist bone in my body.” The resolution is non-binding but House Dems now have on the record that they won’t stand for comments that “legitimized and increased fear and hatred.” The vote was primarily along party lines.

Planned Parenthood. The organization’s president Leana Wen is out after less than a year on the job. Wen – the first physician to lead the org in decades – was ousted after what she called a “secret meeting.” And said that there were “philosophical differences” over the future of Planned Parenthood. All this comes amid attacks on reproductive rights and abortion services in red states around the country.

John Paul Stevens. Yesterday, the former Supreme Court justice died after suffering a stroke the day before. Stevens became a part of the Supremes in December 1975 and went from being a Republican antitrust lawyer to the court’s leading liberal. He retired in 2010 – one of the longest tenures on the court. He was 99.

What’s getting grilled harder than your sister’s new SO…

Facebook. Yesterday, the company did trust falls and made friendship bracelets with lawmakers on the Hill. Kidding, it actually had a brutal hearing over its new digital currency Libra. Facebook says Libra can help people who don’t have access to bank accounts send money. But lawmakers – some who’ve called for regulation over the tech industry – are wary about Facebook’s growing influence. And Libra isn’t making them any calmer. One lawmaker called Facebook “dangerous,” with another saying “I don’t trust you guys.” Way harsh, Tai.

$: What’s money got to do with it? Here’s what Facebook’s crypto plans could mean for your wallet.

Who has binge-watching planned this weekend…

Skimm This. Yesterday, the nominees for the Emmys were announced. “Game of Thrones” doesn’t care how you feel about the ending because the show came out on top with a record-breaking 32 noms. “Schitt’s Creek” got some long overdue love. And “Barry” and “Fleabag” are walking home happy. But avoid eye contact with Jim Parsons. After four wins, the “The Big Bang Theory” actor didn’t get nominated this year. Oh and in case you’ve been too busy having a real life to watch everything, don’t sweat. There’s plenty of time before the winners are announced on September 22.

When you notice a stray gray hair…