Daily Skimm: Ebola, El Chapo, and a Trifecta of 'Hustlers' 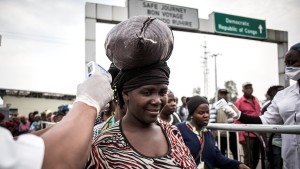 THINGS GOING ON IN THE HEALTH WORLD

The Ebola outbreak in the Democratic Republic of Congo is now a global health emergency.

It is. Ebola's the deadly disease that starts out like the flu and can lead to things like internal bleeding and hemorrhaging. You heard a lot about it a few years ago, when the world's deadliest outbreak hit West Africa, killing 11,310 people.

And what's going on with the current outbreak?

It started last summer and has so far killed at least 1,676 people – making it the second-deadliest outbreak. It hasn't spread to countries outside of the DRC. But the World Health Organization is taking a rare step in declaring it a "public health emergency of international concern." This comes after the first Ebola case was confirmed in the city of Goma – home to about 2 million people and a major transit hub that sits on the Rwandan border.

The WHO had rejected calling this outbreak a global health emergency three times since the outbreak was declared last year. But the spread of the disease has put experts on edge. Now this could bring an uptick in international attention and aid needed to stop it from spreading

There's some good news and bad news on the opioid epidemic.

Ok...let's start with the bad.

Got it. So newly released data shows that drug companies flooded the market with 76 billion opioid pills between 2006 and 2012.

Not the extent of it. We're getting the data now because it's part of the case that thousands of cities and counties are bringing against nearly two dozen drug companies. The numbers were kept under wraps until the media requested it be made public. Earlier this week, a judge said 'the info is all yours.' What it shows is an inside-look at how legal pain pills contributed to the deadly opioid epidemic.

Us too. Preliminary numbers from the CDC show that the number of drug overdose deaths last year likely fell for the first time since 1990. The projected data for 2018 is still expected to be high – potentially more than 68,000 – but shows a decline from last year – which was a record high of more than 70,000.

Both of these developments show how complex the epidemic is. And while the drop in drug overdose deaths is seen as a step in the right direction, there's a lot more to be done to change the reality that about 130 Americans die every day from an opioid drug overdose.

Who's saying 'orange really is the new black'…

Joaquín "El Chapo" Guzmán Loera. Yesterday, a federal judge in New York sentenced the former leader of the Sinaloa cartel to life in prison. El Chapo (translation: Shorty) helped the cartel smuggle billions of dollars worth of drugs into the US. In 2017, he was extradited to the US and went on trial late last year. Witnesses testified that he sometimes took part in torture and murders, and one accused him of paying off Mexico's former president in exchange for coming out of hiding. Earlier this year, El Chapo was found guilty on all 10 counts for charges like drug trafficking and murder conspiracy. Now, a judge is giving him life in prison, plus 30 years for good measure, and ordered him to pay up $12.6 billion. He's likely headed to Colorado's Supermax prison.

Skimm More: Listen to our app's audio ep on how El Chapo became the leader of the world's largest drug cartel and how he finally got caught.

Blocking bills. Yesterday, Sen. Rand Paul (R-KY) blocked an attempt to unanimously pass the bill extending funding for 9/11 first responders' health care. It passed last week in the House. And Sen. Majority Leader Mitch McConnell (R-KY) said 'don't worry, we'll pass it too.' But yesterday, Paul said he's not cool with it until there's a plan for how to offset the cost it would add to the national debt. It's still expected to pass eventually. But the move didn't win him any new friends.

Holding people in contempt. Yesterday, the House voted to hold Attorney General William Barr and Commerce Secretary Wilbur Ross in criminal contempt. This comes after the two refused to provide documents to explain why the admin wanted to add a citizenship question on the 2020 census. Nothing will likely come from this, but it's only the second time in history that a sitting AG has been found in criminal contempt.

Not impeaching the president. Yesterday, the House voted to kill a resolution to impeach President Trump. Before you ask, yes, it's over the comments Trump made about four congresswomen of color. This was the first time the House took up impeachment since Dems took control earlier this year – something Speaker Nancy Pelosi (D-CA) has wanted to avoid. And the division between Dems was clear: 95 said 'let's do this' while 137 said 'let's not.' All Republicans said 'are you really asking?'

Kevin Spacey. Yesterday, prosecutors dropped a criminal case against the actor. Spacey's one of the dozens of people who have been accused of sexual misconduct during the #MeToo movement. In this case, he was accused of groping an 18-year-old man at a restaurant in 2016. Spacey pleaded not guilty. In recent weeks, the case seemed to be falling apart. Now prosecutors say they dropped the sexual assault charge because the accuser refused to testify about a missing cellphone – which Spacey's lawyers claim held evidence that could support his innocence.

When you're trying to find an emoji for your feelings…

Skimm This. Our daily podcast gives a glimpse at the new, more diverse emojis coming our way.

When Hollywood churns out unnecessary remakes...