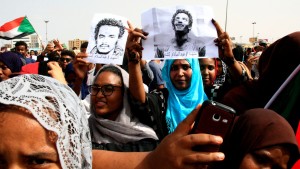 Today, Sudan is hoping to start writing a new constitution.

Back up for a second.

For 30 years, Sudan was under the authoritarian rule of now-former President Omar al-Bashir. During that time, he was accused of leading a genocide that killed hundreds of thousands of people, and of brutally suppressing dissent. Late last year, people started protesting food shortages and rising prices, which quickly turned into anti-government protests.

Ahhh, you said 'former president' for a reason.

Yes. Earlier this year, after months of protests, the military forced al-Bashir out and took power. It then started negotiating with pro-democracy protesters on how to move forward. But then security forces cracked down on protesters, killing more than 128 people and reportedly committing mass rapes. Talks between civilians and the military broke down. But earlier this month, they agreed to share power...for about three years.

Huh. How's that going to work?

Stay tuned. The power-sharing deal they signed this week would see Sudan's government run by a sovereign council made up of five military members, five civilians, and an 11th member both sides agree on. It's still unclear how much authority the council will have as opposed to other parts of government (like the Cabinet or legislative body). That will be hashed out in this new constitution. But that's not all.

Talks today may determine whether military leaders would get immunity from prosecution – something protesters fear could let them off the hook for the recent violence.

Sudan is still reeling from decades of authoritarian rule. But the promise of a new constitution has many feeling hopeful. The negotiations that kick off today may help determine whether Sudan gets closer to democracy...and to what extent the military will continue to hold onto power.

What people will be processing this weekend...

Discussions around racism in the US. Many are still reeling from President Trump's comments earlier this week that progressive congresswomen of color should "go back" to the "crime infested places from which they came." Since then, Trump criticized Rep. Ilhan Omar (D-MN) at a rally and a crowd chanted "send her back." Trump has disavowed the chants. And some Republicans (see: Sen. Lindsey Graham (R-SC)) have backed the president up, arguing that the accusation of racism gets thrown around too easily. But others are distancing themselves from the comments and chants. They're worried the rhetoric from this week will set the tone for Trump's re-election campaign...and for acceptable discourse in the US. As House Minority Leader Kevin McCarthy (R-CA) said, "Those chants have no place in our party or our country."

Japan. Yesterday, a suspected arson attack in Kyoto left at least 33 people dead in the country's worst mass killing in almost two decades. Police say the suspect went into a well-known animation studio there screaming "die," poured flammable liquid, and set the building on fire. He's been detained and is being treated in a hospital. It's still unclear what his motive was, but the attacker alleged that the studio stole his ideas. Japanese Prime Minister Shinzo Abe said the tragedy was "too appalling for words."

This drone. President Trump says the US shot down an Iranian drone in the Strait of Hormuz yesterday after it came close to a US ship. But Iran says it has no idea what the US is talking about. The announcement came after Iran says it seized a foreign (reportedly UAE-based) oil tanker and its 12 crew members. All of this is heightening tensions between the US and Iran – and putting a strategic oil shipping route at risk.

Raising the federal minimum wage. Yesterday, the House voted to bring it up from $7.25/hour to $15/hour by 2025. This had been a key 2018 campaign promise for House Dems after Sen. Bernie Sanders (I-VT) championed it in his 2016 presidential run. If this bill passes, it would be the first federal minimum wage hike in a decade. But the Republican-majority Senate isn't expected to sign off.

The heat wave. Over 150 million people in the US are facing one that'll continue into the weekend. More than half of the country is set to be in temps of more than 95 degrees. Here's how to prepare yourself and stay safe this weekend.

$: What's money got to do with it? Here's how heat waves can affect your wallet.

Who else is counting down for the weekend...

Skimm This. Our daily podcast has a very special episode coming out tonight at 5pm ET on the historic Apollo 11 launch. Subscribe now to be the first on board for liftoff.

Furbies and Skip-Its and Gak, oh my.