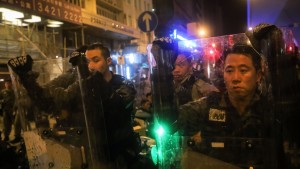 Why were there protests in the first place?

First let’s talk about how we got here: Hong Kong and China have a unique relationship. They have a “one country, two systems” status. Meaning: Hong Kong has its own judiciary and China handles its defense and foreign affairs.

Unique is one way to describe that situation.

Yeah but all that was looking complicated last month, when Hong Kong’s government intro’d a bill that would let some criminals be extradited to mainland China. Many were scared that this would let China silence critics as the mainland increases its influence in Hong Kong. Protesters pushed back, and took to the streets for more than a month.

Yep. Eventually Hong Kong’s leader said the bill was “dead” but didn’t withdraw it or resign – which some are still asking for. Yesterday, they took to the streets again, calling on her to formally take the bill off the table and asking for political reform.

How did all that go?

Well, things started off peaceful, and tens of thousands of people showed up. But after thousands went past a police-designated demonstration area, things took a turn. Protesters vandalized the Chinese government’s liaison office and police responded by firing tear gas and rubber bullets at them.

There might have been hope that these protests would cool off after the bill was suspended. But weeks later, the calls to keep Hong Kong and China separate are still going strong. It’s unclear if Hong Kong’s leader – who’s been accused of being pro-Beijing – will give in to protesters.

Skimm More: Read up on why the extradition bill has raised fears about China’s growing influence.

What’s this all about?

You mean who. And the answer is Puerto Rico Gov. Ricardo Rosselló. Last Saturday, hundreds of pages of messages between him and some people in his inner circle dropped. They’re not pretty. We won’t go into all of them, because space, but they include misogynistic, vulgar, and homophobic comments.

Yeah it is. What doesn’t help him out: allegations of corruption within his government. To add to it, Puerto Rico hasn’t fully recovered from Hurricane Maria almost two years later.

What’s been going on recently?

People have been protesting for days, expressing anger over the chats, but also over Rosselló’s administration in general. Over the weekend, people showed up to protest again. And the president of Puerto Rico’s House of Representatives created a special committee to advise on whether the governor committed any impeachable offenses.

While Rosselló previously apologized, a major demonstration is expected there today. Yesterday, he announced he won’t run for re-election in 2020 and quit as president of his party. But still isn’t stepping down. Now, everyone’s watching to see if it will get to that point…or if lawmakers decide to take action against him.

What has people on edge…

Iran. On Friday, its Islamic Revolutionary Guard Corp seized a British oil tanker in the Strait of Hormuz – one of the world’s most crucial oil transport routes. Earlier this month, British Royal Marines seized an Iranian tanker believed to be carrying oil and accused Iran of trying to bring it to Syria (which would violate European sanctions). It seems Iran was thinking ‘an eye for an eye’ when it seized the British oil tanker. Iran’s forces claimed the tank was seized for violating international regulations. But yesterday, audio recording came out showing that Iran seemed to be ordering the British tanker to change its course and head toward Iran instead, saying “if you obey, you will be safe.” This comes at a time when tensions are high between Iran and European officials – who are still trying to save the 2015 Iran nuclear deal.

Who’s getting called out…

A Pennsylvania school district. It recently sent some families an alarming letter: pay your child’s lunch debt or they may be “removed from your home and placed in foster care.” Roughly 1,000 families owe the district more than $20,000 combined and families that owed at least $10 got the letter. Officials are getting called out for weaponizing foster care. The school hasn’t publicly apologized.

Britain’s Adam Peaty. He became the first man to swim the 100-meter breaststroke in under 57 seconds. To be specific, he did it in 56.88 seconds. Out of breath just thinking about it.

Skimm This. This past weekend was the 50th anniversary of the moon landing. Catch up on the latest episode of our daily podcast to hear all about the historic Apollo 11 launch.

…Oh and India wants to join the ‘Landed on the Moon’ club. Earlier today, it launched a mission to become the first to land on the moon’s south pole.

It’s not the end. Prepare for Phase 4.