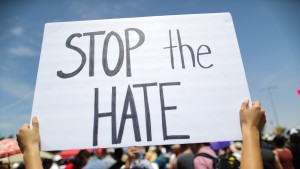 There's been a lot of talk about white supremacy this week.

I've noticed. Where do we begin?

Let's first clear up what exactly it is. And reiterate that it does, in fact, exist in America. A white supremacist is a person who believes white people are superior to other races.

I know it. I hate it. And why are we talking about it?

Because of the mass shooting this past weekend. Authorities say the suspect in the El Paso, Texas shooting wrote a racist manifesto that was posted online minutes before the attack, which left 22 people dead. Some of the language he used echoed President Trump's past rhetoric on immigrants.

The manifesto mentioned a "Hispanic invasion" – reminding many of language Trump has used about immigration, like referring to migrants as an "invasion." That's not all: in 2017, Trump faced criticism for not immediately condemning white supremacists after an organized rally in Charlottesville, Virginia that turned deadly. Trump has condemned white supremacy in the past, and again after last weekend's shootings. He was in El Paso yesterday to meet with victims. But many are saying 'that's not enough.' Former VP Joe Biden accused the president of fanning "the flames of white supremacy." Sen. Cory Booker (D-NJ) accused Trump of encouraging hate.

Are things worse than normal?

Some organizations say yes. The FBI said last year that hate crimes – what white supremacist attacks are often reportedly classified as – have increased three years in a row. Last month, the FBI director said that dozens of recent domestic terrorism-related arrests were tied to white supremacy.

How did we get to this point?

Well, it's not like white supremacy popped out of nowhere – racism has a long history in America. But the recent iteration of white supremacy may have grown out of things like extreme political division, the influx of migrants, social media, and the alt-right movement. And as we said, many are also blaming the rhetoric of the president. But it's not just happening in the US – this is a dangerous problem around the world, and attacks like the Christchurch attack in New Zealand may have ripple effects elsewhere.

What's the government doing about all this?

The FBI says it's doing everything it can. There's a key issue: domestic terrorism isn't a federal crime. And agents want this label in place, so that they can have the resources to fight these types of crimes properly. But the White House has reportedly pushed back on efforts by the Dept of Homeland Security to make fighting domestic terrorism a higher priority.

The El Paso shooting follows a long line of attacks in recent years linked to white supremacy. The result is an environment where many Americans – including Latinos and other minorities – are living in fear. And wondering if they can trust that their government is committed to protecting all Americans, or just some.

Skimm This: Learn more about the issue of domestic terrorism in our recent podcast episode.

While all this is going on...

There's Mississippi. Yesterday, immigration officials arrested around 680 people in food processing plants there over suspected immigration violations. The Trump admin has yet to catch up to deportation rates under the Obama admin. But this latest raid is reportedly the largest workplace sting in at least a decade. And is a signal that the Trump admin is returning to tactics used under the Bush admin, when these types of higher-profile raids were common.

Who's packing up his desk before he could fully unpack…

Pedro Pierluisi. Yesterday, Puerto Rico's Supreme Court said it was unconstitutional for him to be sworn in as the island's governor. Last week, now-former Gov. Ricardo Rosselló stepped down following weeks of protests over allegations of corruption, government incompetence, and the Chatgate scandal. Before stepping down, Rosselló named Pierluisi to be the sec of state (aka first in line to governor)...and therefore the new governor. Only the House confirmed his nomination before he was sworn in. The Senate sued, arguing its approval was also necessary. Now the island's Supreme Court agreed and said 'adiós, Pierluisi.'

Kashmir. Yesterday, Pakistan said it plans to end bilateral trade with India and kick out its ambassador. The reason: Kashmir. Both countries have been fighting over control of the disputed border region for decades. Earlier this week, India announced it will get rid of a constitutional provision dating back to 1949 that gave Kashmir autonomy on most things, except for issues like foreign affairs and defense. It said it wants to integrate the region with India. But Pakistan condemned the move. It says it's worried India may carry out ethnic cleansing against the region's Muslim majority and is calling on the UN to intervene.

Skimm More: Read more about the decades-long fight between India and Pakistan over Kashmir.

Cyntoia Brown. She's the alleged sex trafficking victim who killed a man who paid her for sex when she was 16. In 2006, she was convicted and sentenced to life in prison. Earlier this year, after celebs advocated for her release, Tennessee's then-governor said 'I agree.' Yesterday, she was released on parole. She said that she now hopes to help other women and girls dealing with abuse and exploitation.

What's not signing on the dotted line…

FedEx. Yesterday, it announced it won't renew its ground delivery contract with Amazon at the end of the month. This was after dumping the 'Zon from its air cargo services. But don't worry, Amazon's been working on upping its own delivery game.