Daily Skimm: Climate Change, Kyrgyzstan, and 'The One With Legos' 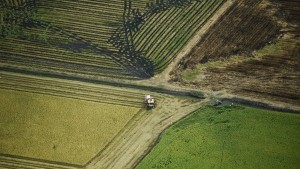 The UN is ringing the alarm on how humans are damaging Earth's land.

That's one way to start the weekend.

Better to rip it off like a Band-Aid. Over the past year, there've been a series of reports on how climate change is bringing humans face-to-face with a variety of crises. We get into some of those here. But to sum it up: we're on a dangerous trajectory and Mother Earth needs our help...yesterday. Now, the UN is warning about the impact on our food supply.

It points out a dangerous cycle: our land management practices are contributing to climate change. And in turn, climate change is threatening our food supply. According to the report, almost a quarter of the greenhouse gases made by humans in recent years came from agriculture, forestry, and other land use. Problem, because the effects of climate change (like more heat waves, droughts, floods, and wildfires) have the potential to disrupt food supply chains. This could affect food security for millions. Also, the increase of carbon dioxide in the air from climate change can make crops we rely on like wheat less nutritious.

Yikes. What can we do?

The report has a few ideas for countries to help avoid worst case scenarios. A few examples: We can change how we grow food with sustainable farming. There's reforestation, which can help suck carbon dioxide out of the air. We could focus on better soil management to prevent it from drying up. And on a personal level, we can change how we eat by eating less meat and wasting less food.

Almost every country in the world pledged to lower emissions as part of the 2015 Paris climate deal. But countries aren't on track to meet those goals and some (read: the US) have even left the deal. With warning after warning, it's become clear the world needs to come together to avoid the catastrophic effects of climate change that might otherwise alter life as we know it.

Skimm This: Our latest pod episode goes deeper into what experts say we're doing wrong when it comes to managing land.

Facebook. Yesterday, an appeals court said a class action lawsuit against the company can move forward. Try not to be too surprised by this, but Facebook and data privacy don't mesh well. This case has to do with facial recognition technology. In 2015, three Illinois-based Facebook users sued the company over its "tag suggestions" feature, which relies on facial recognition. The users say it violates the state's law on biometric data. Facebook tried to block the case, arguing that users can't sue as a group. But now an appeals court is hitting the dislike button on the company's argument, opening up Facebook to the possibility of coughing up billions of dollars in potential damages.

...Oh and Uber could also use the weekend. Yesterday, it announced that it Uber Ate more than $5 billion in losses last quarter. Its stock experienced the opposite of surge pricing.

Kyrgyzstan. Not a ton of stories on Kyrgyzstan these days so reminder that it's the former Soviet republic that's still tight with Moscow. Former president Almazbek Atambayev led the Central Asian country from 2011 to 2017. But he's been accused of corruption and other crimes. After falling out with his replacement (aka the current president), the country's parliament stripped him of his immunity earlier this year. This week, security forces came to his home to try to arrest him. But Atambayev's supporters shot at them, killing one soldier, taking six hostage, and injuring dozens. Yesterday, Atambayev was arrested. The concern now is whether this high-profile shootout could destabilize a country that's already seen two violent revolts since 2005. Moscow is trying to keep things calm and standing with the current government.

Gun debate. Sen. Majority Leader Mitch McConnell (R-KY) says that measures to address gun violence will be "front and center" in the Senate next month. This comes after last weekend's deadly shootings in El Paso, Texas and Dayton, Ohio left a total of 31 people dead. And after McConnell hasn't been willing to call the Senate back in session during its August break to take up the issue.

…Oh and speaking of high-profile exits, former FBI Deputy Director Andrew McCabe. Yesterday, he sued the Justice Dept and the FBI over his firing last year. He claims it was part of an effort to rid the agency of people President Trump saw as disloyal.

While you're bracing yourself for 'Game of 'Flix'...

Lego will be there for you.