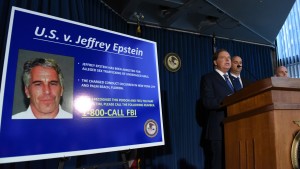 The Justice Department and FBI have opened investigations into the death of Jeffrey Epstein.

Epstein – a well-connected multimillionaire – has been accused of sexually abusing dozens of underage girls. In 2008, he cut a controversial plea dealthat allowed him to avoid federal charges and spend 13 months in jail – with the ability to leave jail six days a week for work.

Exactly. Last year, Miami Herald reporter Julie K Brown released a series of investigative pieces related to Epstein and the plea deal. Since then, an investigation was launched into how it went down. Alex Acosta – who was responsible for cutting the deal back when he was US attorney for Miami – resigned as labor secretary. And federal prosecutors in New York brought new sex trafficking charges against Epstein. Many thought the criminal case against Epstein would finally go to trial. That didn't happen.

On Saturday, he was found dead in his jail cell by apparent suicide. This came a day after hundreds of pages of documents related to a lawsuit from an Epstein accuser were unsealed. And after Epstein was briefly put on suicide watch last month. Since then, he was apparently supposed to live with a cellmate. And a guard was supposed to check on him every 30 minutes. That reportedly didn't happen. And many are outraged.

I can only imagine.

Accusers are angry about the fact that they'll no longer get the opportunity to face Epstein in court. Attorney General William Barr said Epstein's death "raises serious questions." There are also the conspiracy theories.

Epstein had friends in high places, spending time with people like former President Bill Clinton, President Trump, and Britain's Prince Andrew – who's been accused of molesting at least one underage girl. Some have suggested that one of the many high-profile people Epstein interacted with could've tried to silence (read: murdered) him. Politicians (including the president) weren't above speculating.

Is there any evidence that Epstein was murdered?

Not yet. We're still waiting for the results of the autopsy. And to learn more from the FBI and DOJ investigations. The most basic question at this point is how a high-profile inmate died in federal custody.

Epstein's death cuts short the criminal prosecution against a man accused of abusing and sex trafficking dozens of girls. Prosecutors say they won't quit – and could bring charges against any co-conspirators in Epstein's circle. But many worry about what secrets Epstein took to his grave and what justice might look like going forward.

Hong Kong. Today, authorities cancelled more than 100 flights as thousands of anti-government demonstrators flooded the airport. Earlier this year, Hong Kong's government intro'd a bill that would let some criminals be extradited to mainland China. Many were scared that it would let China silence critics as the mainland increases its influence in the territory. Protesters pushed back, and eventually Hong Kong's leader said the bill was "dead" but didn't withdraw it or resign – which many are still asking for. And protests are still going strong despite police using force. Yesterday, police fired tear gas inside a subway station and charged at protesters on an escalator in another. Dozens of videos of alleged police brutality were reportedly circulating online today. Now, protesters have stormed the airport, one of the world's busiest.

Myanmar. Last week, monsoon rains there led to a landslide, killing at least 51 people and reportedly leaving dozens more missing. It's believed to be the deadliest natural disaster to hit the country's southeast in decades. Since June, more than 105,000 people have been displaced due to flooding. Government officials and environmentalists reportedly think human activity (like digging and deforestation) could have caused the landslide or made it worse. It's not over: rain is reportedly expected to continue on the country's coast for the next few days.

What you won't find on Fandango...

"The Hunt." Over the weekend, Universal Pictures said it canceled plans to release the film – which was supposed to come out in theaters next month. The thriller is about elites who kill people for sport and was criticized after the recent mass shootings in El Paso, Texas and Dayton, Ohio. It's unclear if it'll be released at a later date.

Who's making your heart do flips…

Simone Biles. Over the weekend, the 22-year-old became the first gymnast in history to land a double-twisting, double somersault dismount off the balance beam. Double iconic.

Who's singing their last song...