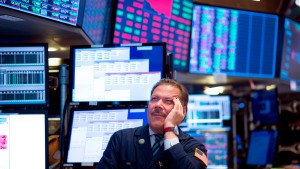 People are on high alert over a possible recession.

I haven't taken econ since college.

We've got you. Bonds are IOUs that institutions – like governments and companies – give out to raise money. In exchange, you get a promise that you'll get paid back in a certain time plus interest. The return is called the yield. On a regular day, long-term bonds (for example: a decade) pay out more than short-term bonds (for example: months to a few years). Let's put it this way: if you were to lend someone $100 plus interest, you're likely to demand to be paid back more in return if you lend them money for 10 years, rather than for two years. The same goes with bonds. Still with us?

I guess. Why are you talking to me about this on a Thursday morning?

Because yesterday, the yield on the 10-year US Treasury note fell below that of the two-year one. And that's not a good thing. It means roles were reversed for the first time since 2007.

And this is alarming because?

Because when this has happened in the past, a recession followed.

Oh. Excellent. How soon after?

Within about one or two years. This happened in 2007, before the Great Recession. And before multiple recessions before that. Following yesterday's news, the stock market ended up taking a tumble.

I know you'll tell me why but I'll ask anyway...Why?

Investors are nervous about a lot of things right now including the US-China trade war and the fact that the German economy isn't doing so hot. When investors are worried, they tend to start selling riskier investments – like stocks – and begin shifting their money to safer investments – like bonds – because it helps protect their money in case things take a turn. The domino effect of more money flowing from stocks to bonds is that stock prices drop. Case in point: the Dow Jones had its biggest drop of the year.

So, time to freak out?

Some financial experts say 'yes...look at history.' Others say 'chill the F out' and that there aren't enough things pointing to a recession right now. And also, that the US economy is still going strong (think: unemployment is low, consumer confidence is high). President Trump says this whole thing is the Federal Reserve's fault.

This might sound like a run-of-the-mill finance story...but it's not. Whether it's a signal of bad times ahead remains to be seen. But what we know now: if you have any investments, your wallet might've taken a hit yesterday.

New York. Earlier this year, Gov. Andrew Cuomo (D) signed the Child Victims Act into law – giving survivors of child sex abuse one year to file lawsuits even if the statute of limitations has expired. That one year period started yesterday. Under the new law, survivors will also be allowed to file a civil lawsuit against their alleged abusers or the institutions that enabled or protected them until they turn 55, up from 23. This is expected to have major implications for organizations – like the Catholic Church and the Boy Scouts of America – which have been dealing with child sex abuse scandals.

Skimm This: Our latest podcast ep goes into who this impacts and what the time constraints are.

Who's getting called out…

Canadian PM Justin Trudeau. Yesterday, an ethics commissioner said Trudeau violated ethics laws by pressuring his then-justice minister over how she handled a corporate corruption case. The case in question: a Canadian company – that has about 9,000 employees across Canada – was accused of bribing officials in Libya to win contracts there. The company could have been banned from government contracts for 10 years if found guilty. Now, a commissioner said Trudeau and his team tried to influence the case by pressuring a prosecutor to settle. Trudeau has taken responsibility but refuses to apologize, saying he was defending Canadian jobs. While there won't be direct implications for him, it could impact his chances of winning October's general election.

What had everyone on edge...

Philadelphia. Yesterday, a gunman opened fire on police and injured six officers in a standoff that lasted for hours. Police were serving a narcotics warrant when the suspect began shooting. Six officers were injured and two were trapped in the suspect's house during the standoff. The suspect eventually surrendered and is now in custody.

Who's putting legal troubles behind…

A$AP Rocky. Yesterday, the American rapper was found guilty of assault by a Swedish court. Reminder: He had been detained in Sweden for around a month over his involvement in a street fight. He will have to pay damages to the victim but won't face any more prison time due to what the Swedish court calls a conditional sentence – he won't serve additional prison time unless he commits a similar offense in Sweden again.

When your book club decides to tackle "Invisible Women"...

Here's something else you'll want to read...and discuss.