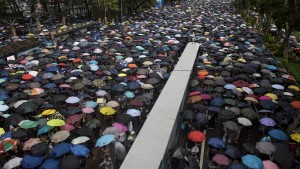 Protesters in Hong Kong rallied for the 11th weekend in a row.

Yup. Reminder: these protests started a few months ago against an extradition bill that some say could've tightened China's ability to crack down on dissent. They've turned into a larger calling for things like democratic reforms and accountability for alleged police brutality. These past few weeks, protests got violent and caused the major international airport there to temporarily shut down. As a result, police approved there being a rally over the weekend but banned people from marching. Protest organizers said that at least 1.7 million people said 'ban schman' and showed up anyway – although police say turnout was more like 128,000.

This weekend's demonstrations show that while there might be a pause in the violence, these protests don't seem to be going away anytime soon. And they're sending a message to the gov that any future attempts to bring Hong Kong closer under the fold of China will likely face similar pushback.

Over the weekend, far-right protesters and anti-fascist counter-protesters clashed in Portland, Oregon.

Yeah. But hear us out: these were organized by the Proud Boys (a far-right group) that wants to get antifa (short for anti-fascists) recognized as a domestic terrorist organization. Something two Republican senators tried to intro in a resolution about a month ago. Far-right and antifa demonstrators both showed up. 13 people were arrested and a few others were injured. Officers had to confiscate weapons like metal poles and bear spray. The Proud Boys said it would come back to Portland every month until the city removes "violent domestic terrorists."

There's currently no government list that designates groups as domestic terror organizations. But over the weekend, President Trump tweeted that "major consideration is being given to naming antifa an 'organization of terror.'" Still no word from him if the same goes for groups on the far-right.

Where tensions may be calming down…

Sudan. Over the weekend, the ruling military council and civilian leaders there signed the dotted line on a final deal to share power. Ever since the military ousted President Omar al-Bashir in April, things have been tense between the two as they've tried to work out a transitional process. Protests had even turned violent, including back in June when security forces killed at least 128 people. But last month, the two sides shook hands on a power-sharing deal. Now they've made things official, paving the way for a civilian-led government.

Afghanistan. Over the weekend, a suicide bomber attacked a wedding in the country's capital Kabul. At least 63 people were killed and 182 others were injured. The local Islamic State affiliate claimed responsibility. It was the deadliest attack in Kabul this year, and comes as the US and the Taliban are negotiating a peace deal in Afghanistan – raising concerns about how safe the country would be if US troops withdraw. The Taliban condemned this weekend's attack, calling it "forbidden and unjustifiable." Today, Afghanistan's president reportedly promised to "eliminate" all safe havens of the Islamic State group.

When none of your theories about GOT came true...

Don't lose faith. But have patience, because you won't find out for a while.

What has you feeling hopeful for humanity…

What cheered everybody up over the weekend…