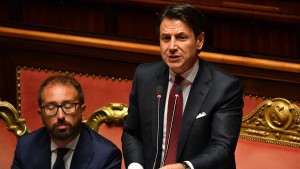 Italian Prime Minister Giuseppe Conte is stepping down after 14 months.

Last year, the country held a national election after President Sergio Mattarella dissolved parliament. None of the parties back then got enough support to form a government on their own, so a coalition government was formed. Conte was put in charge of that coalition – made up of the anti-establishment Five Star Movement and the far-right League party. But recently, the two parties have been arguing over some differences.

Key policy issues, from taxes to migration...emphasis on migration. Italy's location in the Mediterranean has made it a frequent spot for migrants to try to claim asylum. The migrant crisis has led to a build-up of anti-immigrant sentiment across Europe – leading to the rise of the far-right in countries like Germany, France, and Italy. In Italy, the spotlight has been on the far-right League – led by interior minister (and apparent lover of cats) Matteo Salvini. Salvini has taken a strong stance against illegal immigration and called for deporting 500,000 migrants living in Italy illegally. He and the PM didn't always see eye-to-eye. And their recent beef – about a ship full of migrants that had been stranded off the coast for the last two weeks – might have tipped things over the edge.

So where do things stand?

Earlier this month, Salvini went rogue and said two things: one, that the coalition was no longer a thing, and two: that there should be new elections. His party pushed for a no-confidence vote against Conte. The PM called Salvini "irresponsible" and accused him of trying to capitalize on his growing popularity. Instead of dealing with the drama, Conte resigned.

Yep. Conte submitted his resignation to Italy's president, who now has to talk to party leaders to try to shore up a new majority. If he can't, he'll probably have to dissolve parliament once again and call for early elections, possibly as soon as October. Bad timing, since that would be around when Italy has to send its budget plan to the EU.

Conte's government had only been in place for about 14 months before it collapsed, marking the end of western Europe's first fully-populist government. It also illustrates a larger picture of the struggles that Europe faces as it continues to deal with issues like immigration and a wave of far-right movements.

"Off-Facebook activity." Yesterday, the company said it's rolling out its new tool to let users have more control over their data. Some apps and websites outside of Facebook track your activity and send that info to the company for ad targeting purposes. Cool, right? This new tool lets you see who's doing that and sever that tie between the two. This was something CEO Mark Zuckerberg promised users last year in the aftermath of the Cambridge Analytica scandal. Now it's being rolled out in Ireland, South Korea, and Spain – and the company estimates other countries (like the US of A) will have it in "the coming months."

...Oh and Facebook is hiring veteran journalists to help out with a new tool it hopes will become a trusted place to get info. We know, we know...Facebook and trust don't really go together. But it's a start. Maybe.

Whose wallets are about to get a lot lighter…

Endo and Allergan. The two drugmakers have agreed to pay $15 million combined to settle lawsuits around the opioid crisis and avoid going to trial. The opioid epidemic kills on average 130 Americans a day – and multiple drug companies have been sued over their alleged role in the crisis. One trial in Ohio includes about 2,000 cases against companies like Endo, Allergan, Purdue Pharma, and Johnson & Johnson. Endo and Allergan agreed to settle. For the others, the trial is slated to start in October.

Skimm More: Read up on the lawsuits against the pharma industry over the opioid crisis.

Walmart. The company is suing Tesla, alleging that its solar panels have caught on fire at multiple Walmart stores. It's calling on the company to pay up for damages and remove the panels from more than 240 of its stores.

Hasbro. Starting in 2020, the company that made all your My Little Pony dreams come true will start phasing out plastic from new product packaging. It hopes to eliminate it all by 2022. It says it's a "complex undertaking," but knows that consumers care about protecting the environment. Life in plastic, it's not fantastic.

What state is helping out the animal kingdom…

California. It's reportedly going to build the world's largest animal overpass over a major highway in Los Angeles County. It's hoping this will prevent animals like mountain lions from becoming extinct by giving them more access to food and potential mates.

Who's re-arranging his Google cal...

President Trump. He's postponing his meeting with Denmark's prime minister because she has "no interest in discussing the purchase of Greenland." So close, yet also not at all.

While James Bond is making a comeback…

Neo is saying 'hold my beer.'