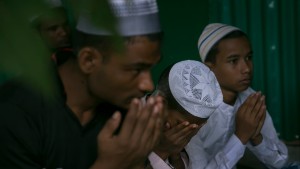 Thousands of Rohingya Muslims are still refusing to go back to Myanmar.

What exactly is going on?

Rohingya are a Muslim minority group that have lived in Buddhist-majority Myanmar for generations. In 2017, Rohingya insurgents attacked Myanmar security posts. The military’s crackdown in response involved mass killings and rapes that forced more than 700,000 Rohingya to flee to Bangladesh.

Last year, Bangladesh and Myanmar agreed to start repatriating Rohingya. But the process stalled following international outcry. And also because no one wanted to return.

Then last month, Rohingya leaders met with Myanmar officials to talk about potentially going back. But Myanmar denies Rohingya citizenship, restricts their travel, and says many are illegal immigrants from Bangladesh. Rohingya have said they won’t return unless they’re recognized as citizens, are safe, and get back their land they left behind.

Myanmar had approved more than 3,000 Rohingya to go back yesterday. But none of them agreed to go. It seems that they’re especially concerned for their safety.

Amnesty International thinks so. It’s warned the refugees that it’s not safe to go back yet. Last year, a UN report said that Myanmar’s top military commanders should be investigated and prosecuted for genocide, war crimes, and crimes against humanity. Myanmar dismissed the allegations. And yesterday, a new UN report said that the sexual violence carried out by Myanmar’s security forces was so severe that it shows their “genocidal intent.”

It is. Bangladesh’s prime minister said that the gov won’t force the refugees to go back if they’re not willing. This is despite some blaming Rohingya for driving up some food prices in the country. The UN’s refugee agency said that many of the Rohingya who have been interviewed want to return if their conditions are met.

This is happening around the two-year anniversary of the brutal crackdowns. It leaves everyone involved in a stalemate, and shows that Rohingya would rather stay in refugee camps than put themselves in potential danger in Myanmar.

What has more baggage than an airport…

The G7. This weekend, world leaders from the Group of Seven (creative, right?) are meeting up in Biarritz, France for their annual summit. The group’s made up of the US, Canada, France, Germany, Italy, Japan, and the UK. This year, expect them to talk about a few things: Russia, because President Trump wants to give the country a warm welcome back to the gang (apparently nyet everyone loves that idea). The Amazon rainforest, because French President Emmanuel Macron said the fires there are an “international crisis.” Brexit, because this is UK PM Boris Johnson’s first time at the summit, and we’re 69 days away from Brexit and there’s still no deal in place. And trade, because Trump recently threatened the EU with new tariffs and the bloc doesn’t wanna play along.

What very much needs to be canceled…

Robocalls. Telecom companies and attorneys general from every state plus DC have agreed to work together to fight those spam calls you get twice a day. The FCC gets over 200,000 complaints about unwanted calls per year (about 60% of all complaints it gets). The pact means that the companies (including AT&T, T-Mobile, and Verizon) will give customers free call-blocking tech and work with law enforcement to track down potential scammers. Thanks for doing this, guys. Seriously.

What will spice up your commute…

Overstock.com. Yesterday, CEO Patrick Byrne resigned for being “far too controversial.” His words, not ours. Last week, Byrne put out a statement referencing the “Deep State,” and said he helped “the Men in Black” otherwise known IRL as law enforcement with investigations related to the Clintons and Russian interference. Something else he had going: a romantic relationship with Maria Butina, a Russian agent who’s in prison for trying to infiltrate US political groups. Now Byrne’s saying ‘and for that reason, I’m out.’ After the news, the company’s (Over)stock celebrated.

What’s the collab you didn’t know you needed…