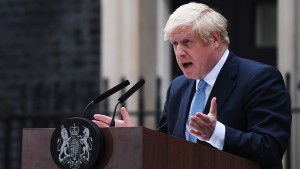 TO SNOOZE OR NOT TO SNOOZE

The UK Parliament is in shambles over...Brexit.

The gift that keeps on giving. What happened this time?

Yesterday, 21 members of the Conservative Party – the one UK Prime Minister Boris Johnson belongs to – went rogue and voted to take control of Parliament's agenda.

By taking control of the agenda, lawmakers may be able to pass a bill that would force Johnson to ask the EU for an extension if there's no deal in place by the time Brexit kicks in. They're expected to bring it to a vote today.

Maybe. It was originally supposed to happen back in March. But because no one could agree on how to make a smooth exit, it got delayed until Oct 31. We know, spooky. Johnson wants to make it happen, with or without a deal. Last week, he moved to suspend Parliament. That cut the amount of time lawmakers had to potentially slow him down or steer Brexit their own way.

I can imagine lawmakers weren't too happy about that.

I can imagine Johnson loved that.

He didn't. And it showed. Now he seems to be into the idea of holding a snap election in mid-October to show the British people agree with him on making Brexit happen ASAP. But even if he wants it, he would need two-thirds of Parliament to sign off.

Who's under more pressure than you on a deadline…

Hong Kong leader Carrie Lam. Today, she formally withdrew a controversial extradition bill that's led to months of protests. Reminder: Hong Kong is a former British colony that was handed back to China in 1997 under a "one country, two systems" deal. But China's been accused of trying to hack away at Hong Kong's independence. The bill would've allowed some criminal suspects to be extradited to mainland China. In June, an estimated millions of people took to the streets to demand it be withdrawn. And the protests – sometimes violent – have continued pretty much ever since.

The UN. Yesterday, it dropped a report saying that the US, UK, and France may be complicit in war crimes in Yemen. The years-long civil war there has turned into a proxy battle between Saudi Arabia (which supports the Yemeni gov) and Iran (which supports the Houthi rebels). The US, UK, and France have all backed the Saudi-led coalition by providing things like weapons and logistical support. Now, the UN – which has called the war in Yemen the world's worst humanitarian crisis – says that both sides may have committed war crimes.

What's rethinking its place in the gun debate…

Walmart. Yesterday, it said it'll stop selling ammunition for handguns and assault-style weapons. It will also stop selling handguns in the one state it still sells them (Alaska). And it's asking customers in states that allow "open carry" to not openly carry weapons in its stores. This comes after numerous mass shootings recently, including one last month at a Walmart in El Paso, Texas, that left 22 people dead. Walmart's CEO says it's changing things up because "the status quo is unacceptable." But the company says it'll still sell weapons used for hunting.

The US dollar. Yesterday, it briefly hit a two-year high compared to other global currencies – like the Euro and pound – that have been struggling. Here's what a strong dollar could mean for your wallet. Hint: it's not always a good thing.

When you thought your work week couldn't get any weirder…

Enter: Zach Galifianakis and his ferns.