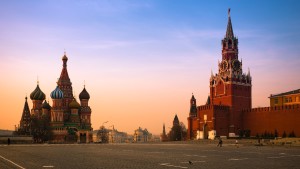 Russian officials are doing damage control after reports that a CIA spy had infiltrated the Russian government.

Is this the plot of the new Sacha Baron Cohen show?

Honestly, maybe. This week, reports came out that the CIA recruited a Russian official more than a decade ago. The spy had managed to get high up in the Kremlin, working directly with a foreign policy aide for President Vladimir Putin. He reportedly got info on the Kremlin's interference in the US's 2016 presidential election – helping the US intelligence community conclude that Putin himself ordered the DNC hack.

Yup. There started to be concerns for his safety back in 2016, after the Obama admin said Russia was behind the DNC hack. They grew after a May 2017 meeting between President Trump and Russia's foreign minister, in which Trump is believed to have shared highly classified info. CNN says that meeting caused intel officials to "renew earlier discussions about the potential risk of exposure." So in 2017, the US got the spy out of Russia in a secret operation.

There's a lot to process here.

There is. And some elements of these reports are disputed. For example, the Trump admin is denying that the president's actions led to this spy getting pulled out of Russia. And Russia is downplaying the amount of access this man had, specifically claiming that he didn't have contact with Putin. In any case: multiple reports have said that he had reached some of the highest levels of the Russian government.

This spy is believed to have provided crucial intel to the US for more than a decade. Now that he's no longer in the Kremlin, the US is believed to have lost key insight into the government there. And with Russia known to target spies abroad, this man's life is now believed to be in danger.

Who's boltin' out the White House doors…

John Bolton. (We had to.) The national security adviser is out, though it's not exactly clear whose terms that was on. He was the third national security adviser under the Trump admin (remember Michael Flynn and HR McMaster? #tbt). Bolton was known for his hawkish stances on Iran and North Korea. He and President Trump had disagreed over those and other issues. And recently, they butted heads over Trump's effort to work things out with the Taliban. Trump said he'll appoint someone to take over next week, opening up questions about what direction the US's foreign policy will take.

...Oh and in news making Trump happy, two Republicans won House seats in North Carolina's special election in a race Trump won back in 2016 but had since become especially tight.

Skimm This: Our latest podcast ep talks about Bolton's résumé and how he shaped foreign policy under the Trump admin.

Sahar Khodayari aka "Blue Girl." Back in March, she disguised herself as a man wearing a blue outfit to sneak into a soccer stadium in Iran...because women there are banned from attending men's games. She was arrested and detained. Last week, apparently after finding out she could face six months in prison, she set herself on fire. She died from her injuries this week, prompting many around the world to speak out against what happened to her. One female Iranian lawmaker reportedly said "we are all responsible."

Antonio Brown. Yesterday, Brown – who recently joined the New England Patriots – was accused of rape by his former trainer. In her lawsuit, she says Brown had raped her last year, after two other instances of sexual assault. Brown's lawyers say his actions were consensual. The Patriots said in a statement that "we take these allegations very seriously," adding that the NFL told the team it'll be investigating.

What's making your techie friends say 'take all of my money'…

Apple. Yesterday, it announced its new lineup of products. For those counting, we're now up to iPhone 11, which comes in three models. Not everyone's a fan of the design...but they can take a bite out of Apple's new iPad and Watch. Oh, and mark your cals for Nov. 1: that's when Apple is set to launch its new streaming service.

Americans' credit scores. Ranging from 300 to 850, the average FICO score just hit an all-time high of 706. You can thank better overall financial health fueled by a decade of steady economic growth for that. Score.

$: Here's how a good credit score can save you a lot of money if you've got home-buying on the brain.

Who's passing 'go' and collecting her due...

Ms. Monopoly. She's part of the new version of Monopoly where women get paid more than men when they pass 'go.' Now that's a game we can get on board with.