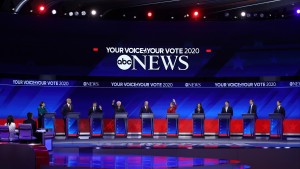 HOUSTON, WE HAVE A DEBATE

Last night, Americans tuned in to see a major face-off on TV.

We're not. So, let's get to the biggest topics of the night…

Health care…everyone agrees on expanding Americans' access to health care. The question is how to get it done: Medicare for All – aka gov-run insurance for everyone. Or a public option.

Race...former Texas congressman Beto O'Rourke promised to pay up on reparations. Both Sens. Amy Klobuchar (D-MN) and Kamala Harris (D-CA) defended their record as prosecutors and talked about racial bias in the criminal justice system. And some candidates did not mince words when it came to calling President Trump racist.

Immigration...this debate took place in Texas – the same state where last month's mass shooting in El Paso left 22 people dead. It was the deadliest attack targeting Latinos in modern US history. O'Rourke got praise for how he supported his El Paso community. Former VP Joe Biden was pressed on the 3 million immigrants deported under the Obama admin. Entrepreneur Andrew Yang spoke of the need to bring immigrants to the US to keep it economically thriving – and spoke of his own story as the son of an immigrant.

Guns…everyone on stage agrees that change needs to be made. Now, Sen. Elizabeth Warren (D-MA) made the point that it won't happen until lawmakers break up with the gun industry and the Senate filibuster. O'Rourke said "hell yes" to taking away AR-15s. Sen. Cory Booker (D-NJ) pointed out that gun violence isn't confined to mass shootings – for many, it's an everyday threat.

Foreign policy...no one's a fan of how Trump's been dealing with China, and the trade war's cost to Americans. South Bend, IN Mayor Pete Buttigieg is wondering what the deal is on the trade deal. Former HUD Secretary Julián Castro brought up China's imprisonment of an estimated hundreds of thousands of Uighur Muslims. Everyone's tired of endless wars. Warren said she'd pull troops out of Afghanistan even without a peace deal. Biden had to answer for his record on Iraq.

Education…Castro said schools are segregated because neighborhoods are segregated. Sen. Bernie Sanders (I-VT) wants to cancel all student loan debt. Warren was a public school teacher, did she mention that?

I need a breather.

We hear you. Here were some of the lighter moments: Biden called Sanders "the president." Booker isn't trying to make everyone a vegan. Castro went after Biden on age...but turns out, he was the one confused. Sanders promises he's not like a regular socialist, he's a cool socialist. Yang is really into his giveaway. TBD if it's legal.

Since the last debate, the number of people who reached the stage went down from 20 to 10. The race is getting tighter, but it's a slow burn to get to one frontrunner. Until then, there's breakout star Linsey Davis.

Who wants action on gun control…

These 145 CEOs. Yesterday, they sent Senate leaders a letter calling for gun control legislation. This comes after 53 people died in mass shootings in the US last month alone. Now, heads of big-deal companies like Twitter, Uber, Yelp, Levi Strauss, and Dick's Sporting Goods are pushing lawmakers to take action, saying it's "simply unacceptable" to do nothing about what they call a public health crisis. Specifically, the CEOs want background checks on all gun sales and stronger "red flag" laws – which would let courts temporarily take away weapons from people who may be a threat to themselves or others. But don't expect any action from the Senate just yet: Sen. Majority Leader Mitch McConnell (R-KY) says that it's hard to pass a law "when you have divided government."

Whose keyboard got stuck on ctrl + z...

The Environmental Protection Agency. Yesterday, it said it's reversing an Obama-era rule that limited pollutants (think: chemicals) near smaller bodies of water – like streams and wetlands. The rule has protected sources of drinking water for about one-third of the US. But farmers near those types of water were frustrated, since the rule dictated what crops they could plant on their properties. Now, the Trump admin is saying 'farm away, my children.' Agricultural groups were happy. Environmental groups were not. The reversal could come within weeks.

...Oh and speaking of the environment, Gucci is saying 'on it.' The brand says it's now carbon neutral. So you agree? You think you look good in (carbon) neutrals?

Who's getting the onboarding docs ready...

"SNL." It's got three fresh faces...and a fresh controversy.