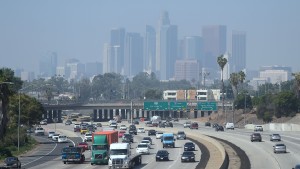 Today, the Trump admin is expected to formally crack down on California's car pollution standards.

We do, actually. Last year, the Environmental Protection Agency dropped a draft plan to roll back Obama-era fuel-efficiency standards. The draft also included a plan to end California's ability to do its own thing and set its own, stricter standards on tailpipe pollution – reportedly the US's largest source of greenhouse gas emissions. Today, the Trump administration is expected to formally revoke CA's authority to set tailpipe pollution rules that are stricter than federal rules.

Thirteen states plus DC follow California's rules on this. So this change is bigger than just CA. The head of the EPA says it's not up to a single state to set rules for the country. But this is one of California's signature environmental protection policies, and it doesn't plan to go down without a fight.

His new memoir. Reminder: For the past six years, the ex-NSA contractor has lived in Russia after leaking hundreds of thousands of classified docs that exposed the NSA's massive phone data collection program. Russia granted him asylum as he faces federal criminal charges in the US over the leak.

What's this new book about?

Read the reviews. So far, it looks like it doesn't include any new bombshells. But the DOJ is still suing Snowden and his publisher, arguing he violated NDAs he signed with the government. As part of the suit, the DOJ wants the gov to get all of the book's profits instead. Snowden tweeted that the US government "filing a lawsuit claiming your book is so truthful that it was literally against the law to write" is a great stamp of authenticity. Put that blurb on the book's cover.

Snowden is arguably the world's most famous whistleblower, whose leak spotlighted the US's blurred line between privacy and security. With the advances in technology and increasing privacy concerns, the discussion won't be going away any time soon.

What's not treating everyone the same…

Walmart, allegedly. Yesterday it came out that the US Equal Employment Opportunity Commission had sent memos to the company warning it to get its practices in check. The EEOC – which enforces federal laws barring job discrimination – said the company had likely discriminated against dozens of female employees, doing things like paying them less or denying them promotions because of their gender. It's asking Walmart and the women to come to a "just resolution," which could include a settlement and changes to Walmart's practices. If not, the EEOC could file a lawsuit against the retail giant.

Cokie Roberts. Yesterday, the legendary journalist and political commentator died at age 75. Over the span of her career, Roberts worked at CBS, NPR, and ABC News – earning three Emmys for her work. During that time, she was known for her forthright style and her expertise in the inner workings of DC. In 2008, she was named a "Living Legend" by the Library of Congress. ABC News's president called her a "true pioneer for women in journalism." RIP.

Where people are checking their notifications...

Israel. Yesterday, the country hit the polls for parliamentary elections for the second time this year. That's because PM Benjamin Netanyahu failed to form a governing coalition the first time around. Now, exit polls seem to show that once again, no single party – including his right-wing Likud party and lead contender Benny Gantz's centrist Blue and White alliance – got a majority. Which means the decision of who will be Israel's next leader could fall on...this guy.

The New York Giants. Yesterday, the coach announced he's benching Eli Manning, the team's starting QB since 2004. Manning has won two Super Bowls with the team, but his performance recently has been...lacking. So the Giants are throwing rookie Daniel Jones into the starting spot this weekend and seeing how things play out. Hut hut, hi there new guy.

What's now on your travel wishlist...