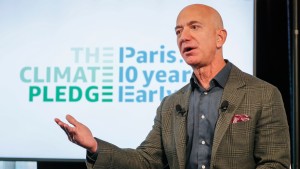 NOW WALK IT OUT

Today, millions of people in more than 100 countries are expected to leave their desks.

Nope – this is over climate change. 16-year-old Swedish climate activist Greta Thunberg has helped organize and inspire walkouts like these in the past. But today's could constitute the largest climate strike in history.

This is happening before the UN Climate Action Summit on Monday. The goal is to up the pressure on politicians and people of all generations – not just teens – to see climate change as a moral issue. The UN warned last year that climate change could lead to a global crisis within our lifetimes. That could potentially include frequent droughts, coastal flooding, and poverty affecting tens of millions of people.

Tell me about the strikes today.

There are thousands happening across the world. Hundreds of thousands of people already turned out in Australia, which saw the first protests. Workers are also expected to join from tech companies like Google, Microsoft, Facebook, and also...Amazon.

Why'd you single out Amazon?

Because it's the first walkout at its headquarters in the company's 25-year-history. And over 1,000 Amazon employees are expected to take part. Among their demands, employees are asking for the company to stop providing cloud services to oil and gas companies. And stop giving campaign contributions to climate change deniers.

How likely is that?

Amazon's response is: 'We have a plan.' Yesterday, the company said it's committed to fulfilling the goals of the Paris climate agreement 10 years early. That would include getting the company to net zero carbon emissions by 2040. It says it will do this in part by buying up 100,000 electric delivery vans.

Until now, Greta Thunberg has managed to rally teens to advocate for future generations. But this strike is calling on people of all generations to take ownership over their actions and pressure those in power to meaningfully lower their carbon footprints.

What everyone is talking about but with very few details…

This whistleblower complaint. It's reportedly about President Trump making a promise to a foreign leader. When? Who knows. What kind of promise? Unclear. Which foreign leader? Again, unclear. But it was considered so credible and alarming that it was called a matter of "urgent concern." Trump denies doing anything wrong.

Skimm This: Our latest podcast ep gets into the legal protections for whistleblowers and where things go from here.

What still has people concerned…

Vaping. Yesterday, officials said the FDA has launched a criminal probe into what's causing the vaping-related lung illness that's killed at least eight people. Authorities still don't know what's behind the outbreak. That's because there's no consistent product, substance, or brand identified in all cases. The investigation is focusing on where people are getting these vaping products and trying to identify more information about the products used.

Who has more explaining to do…

Justin Trudeau. Earlier this week, a photo surfaced of the Canadian prime minister wearing brownface makeup in 2001 at an "Arabian Nights"-themed party. Trudeau apologized and agreed that the photo is racist. He also said 'by the way...it's not the only time I did it.' And said he wore blackface while singing a Jamaican folk song in high school. Yesterday, a video of him in blackface from the early 1990s emerged. Trudeau said that despite his past, he's still an ally. Now it's up for the voters to decide in next month's election.

What scientists are stressing over...

Birds. A new study found the US and Canada have lost nearly 3 billion birds since 1970. That's a 29% decline in bird populations. There are several reasons why this could be happening, including habitat loss and wider use of pesticides. And scientists say this points to a "widespread ecological crisis." What could help: policy changes such as banning harmful pesticides and properly funding conservation programs.

What's got a new business strategy...

Colt. Yesterday, the gun-maker said its pausing production on AR-15s and other rifles for civilians – but will still make them for the military and law enforcement. Reminder: AR-15-style rifles have been used in mass shootings like Newtown, CT and Parkland, FL. Colt says it's still "committed to the Second Amendment" and that this is purely a business decision.