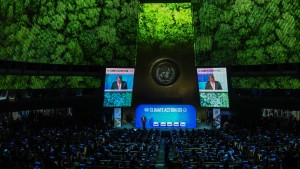 SPEECHES AND MEETINGS AND REPORTS, OH MY

Dozens of world leaders are in New York for the annual UN General Assembly.

Lots of it. Leave time for your commute if you live in NYC. It all kicked off with the UN Climate Action Summit yesterday – where leaders were given up to three minutes to present their plan to tackle global warming. 16-year-old Swedish activist Greta Thunberg hit the point home that despite decades of scientific evidence, world leaders are failing to do enough to combat climate change. Unclear if anything concrete will come from yesterday's summit, but she told world leaders "we'll be watching you." So step up people.

So is it just a climate change event?

Nope. The big event, aka the general debate, starts today. Per UN tradition, Brazil's leader – in this case, Jair Bolsonaro – will give the opening talk. Then comes President Trump's speech, which tends to make a stir. He's expected to use his speech to call on world leaders to band together against Iran. But there are a few other things to keep an eye on: UK Prime Minister Boris Johnson is showing up with weeks left to go before the next Brexit deadline. And Ukrainian President Volodymyr Zelenskiy is in NY for his first UNGA amid questions about a phone call he had with Trump over the summer. Oh, and in case you thought that drama was over, reports yesterday say Trump ordered a freeze on military aid to Ukraine before he had that infamous call with Zelenskiy.

Well, that's a lot to process. Anything else?

Yup, Iranian President Hassan Rouhani is there despite tensions with the West. Yesterday, the UK, France, and Germany joined the US and Saudi Arabia in blaming Iran for the recent attack on Saudi oil facilities. But it looks like Iran is trying to do some damage control – it gave the go-ahead to release a British-flagged tanker it seized earlier this year.

As usual, world leaders are meeting in NYC to wheel, deal, and sync on the key issues they want to advance. And as usual, the climate is calling for a much more radical agenda.

What's saying 'what happens in Europe, stays in Europe'…

Google. Today, the EU's top court ruled that the search engine doesn't have to apply the bloc's "right to be forgotten" rules globally. This is about when you can ask companies to remove certain personal info from their search engine. In 2015, France's privacy regulator ordered Google to apply this around the world. But Google didn't and was fined over $100,000. The issue made its way to court. Now, Europe's highest court says there's "no obligation under EU law" for a search engine to take this beyond the EU member states. Instead, the court is calling on Google to put measures in place to stop European users from just accessing non-EU versions of the site. The ruling apparently can't be appealed.

Indonesia's Papua region. Racial and political tensions there have led to violence recently. Some background: One half of New Guinea island includes the country of Papua New Guinea. The western half includes the Indonesian provinces of Papua and West Papua. The area used to be a Dutch colony but was transferred to Indonesia in the 1960s. Since then, many in those provinces have been pushing for independence from Indonesia.

What has more scandals than a Shonda Rhimes show...

Russia. The World Anti-Doping Agency (WADA) is putting Russia back on watch. Russia was banned from the 2018 Olympics and other sporting events after a major doping scandal was uncovered following the 2014 Olympics in Sochi. WADA lifted a ban on Russia's anti-doping agency last year. But earlier this year, WADA got access to some data from the Russian lab that had some "inconsistencies" (read: some positive drug tests were deleted). The president of Russia's Olympic Committee reportedly called the update "very serious." Russia now faces the possibility of being banned from next year's Olympic Games in Tokyo, and perhaps other sporting events such as the World Cup.

When you're figuring out what you want for breakfast…