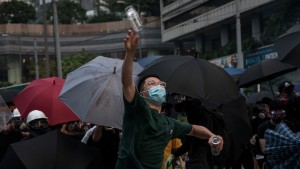 Protests in Hong Kong got violent over the weekend ahead of China's National Day.

This is not letting up.

Nope. Protests have been going strong for 17 straight weekends. It all started in June over a proposed bill that would've allowed some criminal suspects to be extradited to mainland China. Cue people freaking out over China's growing influence before it gets full control of the semi-autonomous territory in 2047. Earlier this month, Hong Kong leader Carrie Lam withdrew the bill. But protesters said 'we need more' (think: her resignation letter and democratic reforms). Over the weekend, thousands turned out in demonstrations that turned violent. Protesters set fires and threw bricks and petrol bombs, and police fired tear gas and water cannons.

This weekend was seen as some of the worst unrest since June. More protests are expected this week as China celebrates the 70th anniversary of its ruling Communist Party.

Skimm More: We Skimm'd everything you need to know about Hong Kong's complicated relationship with China.

Yesterday, thousands turned out in Moscow to call for the release of opposition activists.

Over the summer, election authorities in Moscow banned some opposition candidates from running in the city council election. The reason: they allegedly didn't have enough signatures to qualify. Worth noting that a pro-Kremlin party controlled all of the council seats, and all were up for grabs. Back in July, tens of thousands of people took to the streets calling for free and fair elections. More than 1,300 were arrested, and while many were eventually released, several are still being held. Yesterday – a few weeks after the election – about 20,000 people protested in favor of freeing those who are still detained.

What's typically seen as a minor election turned into a major call for democracy. In the end, the pro-Kremlin party lost almost half of their seats while others like the Communist Party and the liberal Yabloko party won some – which some see as a step in the right direction for the country's capital.

People in Lebanon are taking a stand over the economic crisis there.

You're gonna tell me what's going on, right?

That's what we're here for. The country is one of the most indebted in the world. Specifically, it owes more than 150% of its GDP. That's reportedly led to a number of issues, including financial problems (like a shortage of hard currency) and infrastructure problems (like power cuts and limited water supply). Critics put the blame on government mismanagement and corruption. And some are calling for gov leaders to leave office.

The country's central bank is meeting this week to figure out a way to make sure crucial imports like fuel and medicine aren't impacted. But protesters are worried that things won't change until there are some new faces in the government.

Which i-words the Trump admin is worried about...

Impeachment. The impeachment inquiry into President Trump is still on everyone's lips, even Robert De Niro's. The latest: the US's special envoy for Ukraine resigned last week, without any explanation. And House Intelligence Committee Chairman Adam Schiff says the whistleblower has agreed to testify before Congress "very soon." Stay tuned.

…Oh and speaking of inquiries, the Hillary Clinton email probe is back.

Who's got their head in the clouds…

Elon Musk. Over the weekend, the SpaceX CEO unveiled new details on the Starship spacecraft. It's designed to send people and cargo into the solar system (think: the moon, Mars, or just to orbit in space). And he's hoping it can reach orbit within six months. The company plans to test out new prototypes within the next few months. To infinity and...Mars, apparently.

What makes us nostalgic...

Forever 21. Your favorite retailer from college filed for bankruptcy and is planning to close up to 178 stores in the US. It says this move is an "important and necessary step to secure the future" of the company. Guess those $3 T-shirts weren't gonna last Forever (21)...

When you're dress shopping for your last wedding of the season…

Reach for the stars.