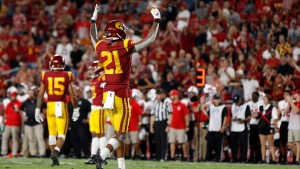 California just cleared the way for college athletes to make some cash.

Let me pretend to be shocked by the fact that that wasn’t a thing before.

The NCAA’s longstanding rule has been that college athletes can’t make a profit off of their name or talent. But here’s the fun thing: the schools and the NCAA can. Many – including lawmakers – have been calling this situation out as unfair for a while.

So California did something about it?

Yep. Yesterday, Gov. Gavin Newsom (D) signed a bill into law that allows college athletes to sign the same kinds of endorsement and sponsorship deals as pro athletes. As well as hire agents. The fine print: athletes can’t sign deals that conflict with a school contract (think: an athlete going to a Nike-sponsored school can’t sign a deal with Adidas).

Huge. The Golden State is the first in the US to pass a law like this. Supporters say this new law could encourage star players to stay in school rather than drop out to go pro.

Well, the NCAA says this law is unconstitutional and it’s looking at “next steps.” So it’s definitely not a fan. It says there needs to be a clear distinction between college and professional athletes. And that this would add an unfair recruiting advantage to California schools.

What do schools have to say?

They’re worried about fewer resources and opportunities for their athletes, and how this could negatively affect female athletes.

The law is set to take effect in 2023. It could lead to California schools getting shut out of certain NCAA competitions (like March Madness or bowl games). Or it could lead to other states following California’s lead, and pressuring the NCAA to make a drastic change to its rules. Either way, this could reshape US college sports as we know it.

Hong Kong. Tens of thousands of people took to the streets today to protest the Chinese government. These demonstrations initially started back in June over a proposed extradition bill that set off alarm bells over China’s growing influence there. Today’s protests – which started off peaceful but turned violent – coincided with China’s celebrations of the 70th anniversary of its ruling Communist Party. Protesters threw petrol bombs and police fired tear gas. Police also shot a protester – the first time that’s happened in these protests. So far there’s no word on their condition.

What you might as well get used to hearing about…

Impeachment. Congress might be on a break, but the impeachment inquiry into President Trump is moving quickly. House Dems have scheduled hearings and issued subpoenas – including for Trump’s personal lawyer Rudy Giuliani. But the president isn’t slowing down either – he suggested that the House Intel Committee Chairman Adam Schiff (D-CA) be arrested for treason. He also quoted a pastor saying impeachment would create a “Civil War like fracture.” Meanwhile, Senate Majority Leader Mitch McConnell (R-KY) said the Senate would have “no choice” but to put Trump on trial if the House votes to impeach him. Because, rules.

What’s getting pulled from the shelves…

WeWork’s IPO. Yesterday, the company announced it is withdrawing its IPO because it can’t make it (We)Work right now. It’s been on a rollercoaster over the last few months as it has been burning through cash and couldn’t get potential investors on board. The announcement comes days after its co-founder and CEO stepped down.

Heartburn medication. CVS, Walgreens, and Rite Aid will stop selling Zantac and its generic version. The reason: the medicine may contain low levels of a cancer-causing chemical. The FDA is looking into the risk for patients, but hasn’t warned people to stop taking the medication right now.

…Oh and some people are pulling Rent the Runway from their wardrobe. The company isn’t taking new customers as it tries to fix operational issues that have led to order delays and cancelations.

Who’s getting familiar with the sidelines…

Vontaze Burfict. The NFL suspended the Oakland Raiders linebacker for a helmet-to-helmet hit from over the weekend. The league pointed to his “repeated violations of unnecessary roughness rules.” He’ll be out for the rest of the regular season and playoff games – the longest-ever suspension for an on-field incident.

Skimm More: Read up on how head injuries in football could impact the sport’s future.

This is the Upside Down.