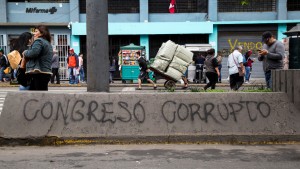 A TALE OF TWO PRESIDENTS

Peru is in the middle of its worst political crisis in decades.

Peru's been plagued by corruption for years, most recently with a scandal involving Odebrecht – the Brazilian construction company that paid millions of dollars in bribes to win public works contracts in places like Peru. The four most recent presidents have been implicated in the scandal, and the main opposition party leader is in jail over her alleged involvement.

Yeah it's not a good look. President Martín Vizcarra has tried to implement anti-corruption reforms to prevent a repeat. But because of the opposition-controlled Congress, it hasn't really worked out.

Sounds about right. So what's with this crisis you mentioned?

Recently, lawmakers have tried to rush to replace six of the seven judges on the country's top court – something Vizcarra disagrees with. Not surprising since several of the nominees are reportedly facing charges as serious as kidnapping and extortion. Earlier this week, lawmakers went ahead with their plan and voted in a new member of the court. Vizcarra took it as a de facto vote of no-confidence and dissolved Congress.

That's what lawmakers are saying. They're accusing him of violating Peru's constitution. So they said 'two can play that game,' voted to suspend him from office for a year, and nominated the VP to take his place. The VP was sworn in...then reportedly resigned. But for a minute there, technically there were two presidents.

Can Congress do that?

Well that's up for debate. Even though some think Vizcarra violated the constitution, others say that Congress shut down before it suspended Vizcarra, meaning its vote is meaningless.

It's possible that the top court will have to play middleman between Vizcarra and lawmakers. But Vizcarra is very popular there (Congress is...not), and people turned out to rally in support of him this week. Plus the military has thrown its weight behind him. So it's possible he could keep the gig until a new presidential election is held.

Peru is one of Latin America's strongest economies, and its constitutional crisis is putting the region on edge as it now deals with another presidential crisis after Venezuela.

Who's facing time in prison…

Amber Guyger. Yesterday, the former Dallas police officer was found guilty of murder for shooting her black neighbor Botham Jean. Last year, Guyger walked up to Jean's apartment and found the door unlocked. Guyger claims that she thought the apartment was hers and that Jean was an intruder. Jean was unarmed and eating ice cream when he was fatally shot. The shooting was another case that highlighted white police officers using fatal force against unarmed black people in the US. Guyger was convicted of murder – a rare conviction in a high-profile police shooting – and faces anywhere from five to 99 years in prison.

What's getting updates in the legal world…

Harvard. Yesterday, a federal judge ruled in favor of the school's admissions process. In 2014, a group called Students for Fair Admissions filed a lawsuit arguing that the university is illegally discriminating against Asian-American applicants to allow more black and Hispanic students in. Harvard denies it's being discriminatory. But says it does consider race in admissions because it wants a diverse student body. Now, a judge is saying 'I second that.' If the ruling is appealed and makes its way up to the Supreme Court – which has a solidly conservative majority – it could impact a decades-old ruling on affirmative action.

Abortion. A federal judge temporarily blocked Georgia's abortion law from going into effect in January. It bans the procedure once a fetal heartbeat is detected – which can be as early as six weeks, before many women even realize they're pregnant. This – like some of the other states that have recently passed strict abortion bans – will likely be a long court battle.

Net neutrality. Yesterday, a federal appeals court pretty much upheld the FCC's controversial 2017 repeal of net neutrality rules. The court says the FCC's move to end net neutrality is allowed, but states can set their own rules.

Facebook CEO Mark Zuckerberg. He's saying 'lawyer up' to Sen. Elizabeth Warren (D-MA) over her efforts to break up the social media company if she were elected president. Warren says 'that's fine, tough guy, see you in court.'

Where's Gigi Hadid when you need her.

Who's putting tabloids on notice…