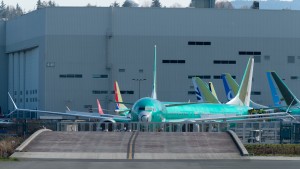 A Boeing engineer claims that while the 737 Max planes were in development, the company rejected a proposed safety system as a way to cut costs.

In the past year, two Boeing planes – both 737 Max 8s – were involved in deadly crashes, killing a total of 346 people. The company – and both crashes – are still under investigation. But investigators believe a single feature pushed both planes into nose dives.

And this safety system would have changed that?

This engineer thinks it could have. He filed an internal ethics complaint that the gov has access to as part of its investigation. In the meantime, Boeing 737 Max planes have been grounded – costing the company billions as it tries to get the go-ahead from the FAA to get them in the air again.

It's still not clear how the gov's criminal investigation into Boeing will end. But all of this could have major implications for Boeing, the US economy, and flight safety in general.

The US just got the go-ahead to impose tariffs on some EU goods.

Boeing (the US's leading plane maker) and Airbus (Europe's leading plane maker) are – surprise – competitors. For years, the US and the EU have accused each other of giving illegal subsidies to their respective companies. The World Trade Organization (WTO) has found shady behavior on both sides. Yesterday, the WTO said the US is entitled to tariff the EU on $7.5 billion in goods – reportedly the equivalent of what Boeing lost per year because of these subsidies.

Oh, I smell a trade war.

The EU says it wants to avoid that. But the US already has a list of EU goods it plans to impose tariffs on, including French wine, Scotch whisky, German coffee, Italian cheese, and – surprise – Airbus orders.

All of this could escalate when the WTO is expected to rule on the US's alleged subsidies to Boeing next year, leaving the door open for the EU to potentially impose retaliatory tariffs. Meaning, more than a year after a shaky trade truce with the EU, we could be on the eve of a new trade war.

Who's a man with a plan…

Boris Johnson. Yesterday, the British prime minister proposed a new plan for the UK's very messy break up with the EU. One of the biggest issues facing Brexit has been figuring out what to do with the border between Northern Ireland (part of the UK) and Ireland (part of the EU). It's an area with a violent history. Johnson's new plan would keep Northern Ireland tied to EU trade rules on food and other goods. But there would still need to be some sort of customs check, and it's not clear where that would happen. Johnson assured it would be away from the border. The EU says the proposal represents "progress." The question now is what negotiations might look like.

Vice Media. Yesterday, it said it bought female-focused Refinery29. The goal is to expand Vice's audience, up its revenue, and help it compete with the Googles and Facebooks of the world. Oh, and the deal is estimated at about $400 million...so add that to Vice's Money Diary.

TripAdvisor. The travel site says it will no longer be selling tickets to places that breed or import captive whales and dolphins (think: SeaWorld). It's the latest update to the company's 2016 animal welfare policy. Be (Trip)Advised.

Who's receiving 'get well soon' cards…

Sen. Bernie Sanders (I-VT). The presidential candidate was hospitalized this week and treated for a blocked artery. His campaign events are canceled until further notice.

Who's channeling Lizzo's 'if I'm shinin', everybody gonna shine'…

Melinda Gates. Yesterday, the billionaire philanthropist announced her plan to spend $1 billion over the next 10 years to help promote gender equality and expand women's influence in the US.

What you'll be excited to shout out again…