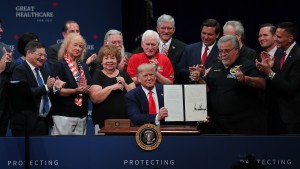 President Trump just said to Dems, ‘I see your Medicare for All pitch and raise you this executive order.’

Medicare is a gov program that provides health insurance to Americans age 65 and over, as well as some younger people with disabilities. In 2016, Sen. Bernie Sanders (I-VT) pushed the idea of Medicare for All – expanding Medicare to everyone and eliminating most private health insurance. Since then, progressive Dems have jumped on board. Yesterday, Trump signed an executive order to fight back on the issue.

The focus is on Medicare Advantage – plans that people who qualify for Medicare can get through private health insurance providers like Aetna and Blue Cross Blue Shield. Roughly a third of the 60 million people on Medicare use these plans. The gov pays those companies a fixed amount to help cover people who may want access to more services. This executive order is designed to strengthen Medicare Advantage.

It reportedly directs the gov to cover more things for people who opt into it – like adult day care. It’s also trying to lower costs for procedures that take place in hospitals as opposed to doctor’s offices.

How are Democrats responding?

They haven’t yet. But the president is getting called out for framing the issue as Democrats trying to take away Americans’ health care benefits, when they haven’t advocated for that. Some Dem candidates (like Sanders and Sen. Elizabeth Warren (D-MA)) would effectively get rid of private insurance. But other Dems (like former VP Joe Biden and Sen. Amy Klobuchar (D-MN)) support the idea of a public option for those who want it.

Health insurance has become one of the biggest issues for 2020. The Trump admin has proposed cuts to Medicare in the past, which is running out of money. But now, the admin is trying to pitch itself as a defender of the very program it’s tried to cut.

$: What’s money got to do with it? Here’s what Medicare for All could mean for your wallet.

Who’s got more than health insurance on his mind…

President Trump. In case you forgot, there’s now an impeachment inquiry against Trump that centers on a phone call between him and Ukrainian President Volodymyr Zelenskiy this summer. New reports say Trump ordered the removal of the US ambassador to Ukraine over concerns that she was biased against him and could have blocked efforts to get Ukraine to investigate former VP Joe Biden. And newly released texts show that US officials worked with a Ukrainian official to get Ukraine to publicly commit to an investigation in exchange for a DC visit. But forget Ukraine for a second, because Trump is now openly suggesting that Chinese President Xi Jinping investigate Biden and his son Hunter. This is Trump’s third known instance of encouraging foreign govs to investigate or take on a political rival (see: Russia, Ukraine, and now China).

Iraq. At least 33 people were killed in anti-government protests that broke out this week. The protests started in Baghdad with demonstrators frustrated over unemployment, poor public services, and corruption. The country is still recovering from its war with ISIS and its infrastructure is far from repaired. The gov has set up a curfew and cut most of the country’s internet access. But that hasn’t stopped protesters. They’re now threatening to take down the gov of Prime Minister Adel Abdul-Mahdi. And are calling to mind the 2011 Arab Spring protests.

What is paying out…

MGM Resorts International. Victims of the Las Vegas mass shooting have settled with the hotel owner for up to $800 million. The attack, which happened two years ago this week, left 58 people dead as the shooter fired from his hotel room into a crowd at a country music festival. Survivors and family members of victims later sued MGM, the owner of the hotel where the shooting took place. They accused the hotel’s owner of being negligent in allowing the shooter to stock rifles and thousands of rounds of ammunition there. The lawyer representing the victims called the settlement a milestone for their recovery.

Who’s in the spotlight…

James Franco. Yesterday, two women filed a class-action lawsuit against the actor, accusing him of sexually exploiting female students at his former acting studio. Among other things, the suit – which also targets Franco’s production company and his business partners – accuses Franco of dangling the possibility of roles in exchange for getting women to engage in sex scenes and nudity in his classes. Franco’s lawyer reportedly said that this “is not the first time that these claims have been made, and they have already been debunked.”

What to keep in check…

Drinking. A new study suggests future parents should stop drinking up to a year before conception. That’s because the study found a link between parents’ drinking habits during that time – especially future dads – and babies’ chances of having congenital heart defects.

The Fresh Prince of Bel-Air.