Daily Skimm: Violence in Iraq, Insurance for Visas, and the "Biles II" 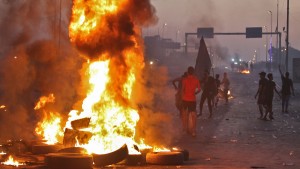 Iraq is experiencing its worst violence since its war with ISIS.

Iraq declared a win over ISIS in 2017, but its infrastructure is still wrecked from that war and other conflicts (see: the 2003 US invasion of Iraq). Despite record oil output, its economy is struggling. Last week, thousands of people turned out to protest things like unemployment and corruption. But security forces cracked down with tear gas and live rounds. More than 100 people have been killed and more than 6,000 were injured.

Correct. But the gov is now trying to do damage control. This weekend, it lifted a curfew that many had previously ignored. And rolled out a series of promises.

There are a lot. Including: subsidized housing and land for the poor as well as unemployment benefits, job opportunities, and job-training programs. The gov’s also promising to provide compensation to the families of those killed in the protests.

How are protesters responding?

Many are unimpressed. That is, those who’ve even heard about these promises since the gov cut off the internet for much of the country. And has yet to flick the ‘on’ switch.

It’s not clear. The main thing everyone is watching is how Iraq’s powerful clerics and Iranian-linked militias respond to the protests, since they have a ton of sway – and could escalate the situation, fast. One influential cleric has called on the gov to step down and for snap elections to be held. The international community (think: the EU, UN, and others) is calling on the gov to exercise restraint with protesters.

Iraq has seen war after war in the past two decades. But it’s never seen an Arab Spring. Considering Iraq’s ties to both the US and Iran, drastic changes there (like an uprising) have the power to drag foreign governments into the mix.

Northern Syria. Last night, the Trump admin gave the green light to a Turkish operation there that could lead to fighting with US-backed Syrian Kurds. Separately, the Kurds (a semi-autonomous ethnic group in the region) and Turkey have been important partners to the US in fighting ISIS. The problem? Turkey sees Syrian Kurds as terrorists. The US has been trying to keep the peace between the two, but now it seems to be taking a step back. The White House said the US “will not support or be involved in the operation,” which Turkey reportedly says is focused on stopping threats from Kurdish fighters. And it looks like US forces have started to withdraw from Syria’s border, leading to concerns over whether this could overturn the work that’s been done there against ISIS.

Why Ukraine is on edge…

This protest. Yesterday, thousands in Ukraine’s capital, Kiev, turned out to protest plans to hold elections in the eastern part of the country. Ukrainian President Volodymyr Zelenskiy was elected earlier this year, in part for his pledge to end the five-year conflict there with Russian-backed separatists that has killed more than 13,000 people. Last week, Zelenskiy’s gov signed a deal with Russia to hold elections in the rebel-held east and potentially give the region special status. It’s seen as a promising breakthrough for peace. But protesters see this as Zelenskiy giving in too much to Russia. All this comes as Zelenskiy is dealing with the aftermath of his phone call with President Trump that’s the center of the impeachment inquiry you’ve been hearing about.

What the Trump admin is cracking down on…

Immigration. On Friday, the admin said it’ll deny visas to immigrants unless they can prove they have health insurance or can pay for medical costs. It’s part of the admin’s plan to curb both legal and illegal immigration – and another step that could make it harder for low-income immigrants to stay in the country. The admin says those who can’t afford health care are a burden on the industry and taxpayers. But critics say rules like these favor wealthy immigrants and go against American values. Hundreds of thousands may be impacted. The change is set to take effect next month.

Diahann Carroll. The pioneering actress has died at age 84. Her career was full of firsts as an African-American woman: the first to win a Tony for lead actress, to star in a sitcom in a non-servant role, and to star as a major character on a primetime soap. You may have seen her more recently in “Grey’s Anatomy.” Oprah and other celebrities have posted tributes, crediting Carroll as a trailblazer in the industry. RIP.

When your nephew can’t stop dabbing…

Try the Biles II instead.