Daily Skimm: Kurdish Fighters, NBA-China beef, and the Best Songs of the Decade 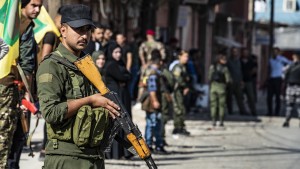 President Trump is dealing with the aftermath of his major policy shift in northeastern Syria.

On Sunday, the Trump admin said that Turkey would soon move ahead with an operation in Syria and that the US would stay out of it...raising alarm bells about what that means for US-backed Kurds there.

The Kurds – an ethnic group in the region – have been a key US ally in the fight against ISIS. And have gained control of territory in northeastern Syria. But Turkey – a NATO ally – sees them as a terror threat. Turkish President Recep Tayyip Erdoğan has long threatened a military operation in Syria to take them down.

Well that puts the US in a tricky spot.

Yup. But a statement from the White House Sunday seemed to give Turkey's operation the green light. Trump defended the call, saying he was elected on pulling the US out of "ridiculous endless wars" and that it's time to "bring our soldiers home." But there was pushback.

Lawmakers on both sides of the aisle. But especially Republicans. Sen. Majority Leader Mitch McConnell (R-KY) said the move would benefit Russia, Iran, ISIS, and Syrian President Bashar al-Assad's regime. Sen. Lindsey Graham (R-SC) threatened to intro a resolution in the Senate to oppose the "shortsighted and irresponsible" plan and ask for a reversal. On top of that, former US Ambassador to the UN Nikki Haley said leaving Kurds "to die is a big mistake." Overall, many are worried the US is abandoning a key ally and that doing that could bolster the chances of ISIS making a comeback.

Well, Trump has also sent some mixed signals on where he stands. He said that if Turkey does anything that his "great and unmatched wisdom" thinks is too much, the US will destroy Turkey's economy. The Pentagon said that the US doesn't condone a Turkish attack in northeastern Syria. So there's that.

Trump campaigned in part on ending US involvement in conflicts abroad, including in Syria. But his "America First" approach could hurt the US's credibility with key allies and complicate things in the region.

Skimm This: Our latest podcast ep explains who the Kurds are and how history may be repeating itself.

Who's not exactly thrilled about where things are headed...

Climate change protesters. Yesterday, hundreds of people were arrested in London and across the world. The British-based group behind these protests – Extinction Rebellion – blocked traffic to demand more action on the issue. The org was started last year and has since succeeded where Brexit has not: getting the UK to do something. It has called on the gov to commit to net-zero greenhouse gas emissions by 2025, among other goals. After protests and meetings with British officials in the spring, the UK Parliament declared a climate emergency. It also became the first major economy to commit to net-zero emissions by 2050 – a timeframe that will still require major infrastructure changes. Stay tuned: more protests like this are scheduled over the next two weeks.

Who just got caught in a (space) jam…

The NBA. It's getting slammed for how it's handled its multi-billion-dollar relationship with China. Last week, the Houston Rockets' general manager tweeted in support of the ongoing pro-democracy protests in Hong Kong. He then quickly hit 'delete' and the NBA apologized. Turns out, this whole thing ticked off...everyone. On one side, Chinese partners suspended ties with the Rockets, sponsors in China pulled their money, and China's state broadcaster canceled plans to air NBA preseason games being played in China. On the other, US lawmakers are calling the league out for what they see as stifling free speech and prioritizing money over human rights.

Which state is making edits to its laws…

California. Yesterday, the governor signed a law that lets pharmacies dispense HIV prevention pills without a doctor's prescription, and supporters say it's the first state to do so. That includes both pre- and post-exposure medications (aka PrEP and PEP). The law also bans insurance companies from making patients get approval to get the drugs. Supporters hope this will remove barriers for people who may need the meds (like having to wait for a doctor's appointment) and help end the stigma around the drugs.

Who definitely used to crush their high school science fairs...

These scientists. Yesterday, the Nobel Prize in medicine went to three scientists who helped discover how cells adapt to oxygen levels. ICYMI, oxygen is everything to us aerobic organisms. Knowing how cells respond to changing oxygen levels may have big implications for diseases where oxygen plays a big role, like cancer, heart attacks, and anemia.

What'll give you more nostalgia than a Tracy Chapman song…

The best songs of the past decade.