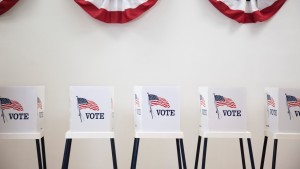 A bipartisan group of senators is ringing alarm bells over 2020 election interference.

Yes, this again. Let's go over this for old times' sake: the intel community found that Russia interfered in the 2016 presidential election to undermine Hillary Clinton and help get President Trump elected. Ever since those findings, lawmakers and tech companies have been trying to figure out ways to prevent meddling in upcoming elections.

And how's that been going?

Well if you ask the Senate Intelligence Committee, they'd say not great. Yesterday, the committee – which has been investigating Russian interference in the 2016 election – dropped a report on the issue. It confirmed that Russia was very much Team Trump. That it was part of a bigger plan to create distrust in the government and in other Americans. That more interference is likely ahead of the 2020 election. And that it's time to fight off that threat. Now.

Its recs are for the White House to establish a task force on this. And to warn Americans about the dangers of election interference and spreading misinformation online. For Congress to look into legislation that would add transparency around who buys online political ads. For Silicon Valley to be more open about misinformation campaigns and to share their intel. And for political candidates to carefully vet their social media posts to prevent any potential interference.

The president has tried to minimize the impact of Russia's 2016 interference. But not only did a Republican-led committee highlight the scale of its efforts...Chairman Sen. Richard Burr (R-NC) says Russia and others – like China, North Korea, and Iran – aren't giving up. And that tech companies, the gov, and law enforcement need to come together to protect the US democratic process.

Skimm More: Read up on everything you need to know about the 2020 election, from the candidates to the buzzwords you keep hearing.

Who else is talking about the US democratic process...

House Dems. Yesterday, they subpoenaed US Ambassador to the EU Gordon Sondland to testify about President Trump and Ukraine. Sondland had originally been invited to testify because of his role as an intermediary in setting up the infamous phone call between Trump and Ukrainian President Volodymyr Zelenskiy. But the Trump admin said 'you can't have him' and blocked Sondland from voluntarily testifying in front of what Trump called "a totally compromised kangaroo court." In a shocking turn of events, Dems didn't love that. They said that amounted to "strong evidence of obstruction" and issued Sondland a subpoena.

Ecuador. Earlier this week, the country's president, Lenín Moreno, announced he moved his government from Quito (the capital) to a port city amid massive protests in Quito. They started last week after the gov announced it'll end a decades-long fuel subsidy. That led to a spike in fuel prices, which upset transportation workers, young people, and indigenous groups. Protesters have blocked roads, burned tires, and clashed with riot police. Dozens have been injured, more than 500 people have been arrested and at least one person has been killed. Moreno had declared a state of emergency, and has since moved his desk away from the violence. Today, thousands of protesters are reportedly expected to show up in Quito for the seventh day of protests.

Vaccines. The CDC is urging pregnant women to get the flu and whooping cough vaccines. Currently, only around 35% of pregnant women get them. And the CDC says they could help protect the health of both mom and baby.

What's going to blow your mind…

Saturn moons. Scientists recently discovered 20 new moons around Saturn, bringing the total of the planet's moon entourage to 82 – a new record for our solar system. Cue (tear) drops of Jupiter.

What you can brag about...